Oh, give me a home where the chrome buffalo roams ...

In celebration of Indiana's 200th birthday, a 200-pound fiberglass bison -- contributed by the Duke Energy Foundation -- is being placed in Putnam County as part of a public art project with the Indiana Bicentennial Commission. 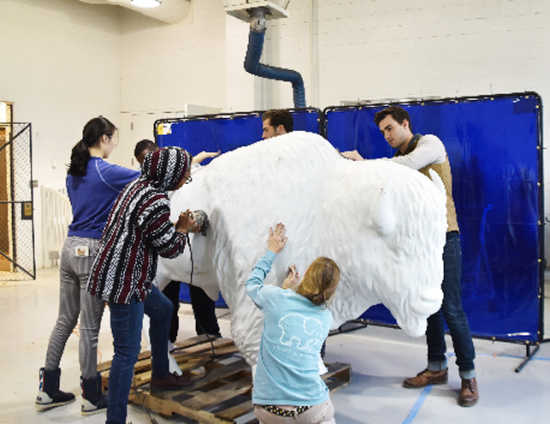 The bison statue will be at the Putnam County Courthouse for unveiling on Sunday, Dec. 11 during the 1-4 p.m. Bicentennial Celebration.

It is expected to remain there for approximately a month before returning to the DePauw University campus where it has been involved in the creative process the past week.

Uniquely, instead of decorating the bison with a predictable collage of painted images, the DePauw University Art Department is having the five-foot tall by eight-foot long buffalo chromed. That essentially removes all controversy over what was or was not represented.

By chroming the life-sized bison, the theory is, it will constantly change point of view by reflecting the surrounding environment as the mirrored surface reflects back the person looking at it.

"It's timeless," an Art Department spokesman said. "Because of its mirrored surface it disappears and reappears depending on your point of view, like bison or jobs or memory. It's fleeting and forever at the same time."

With the last-minute nature of the project, it fell to the DePauw Art Department to pull it off in time for Sunday's dedication.

It is Art Professor Lori Miles who has taken the bicentennial bison project by the horns, enlisting students such as Jordan Horton, Kyle Bartos, Dylan Hart, Alec Minielly and Shuqi Li to help sand the statue to make it ready for the chroming process.

The project is part of the Indiana Bicentennial Commission's statewide public art effort where artists, students and other Hoosiers have decorated the fiberglass bisons. The legacy project aims to engage Hoosiers in Indiana's bicentennial and to have colorful bison displayed in each of Indiana's 92 counties.

The Duke Energy Foundation is contributing six bisons to different locations in its service area. 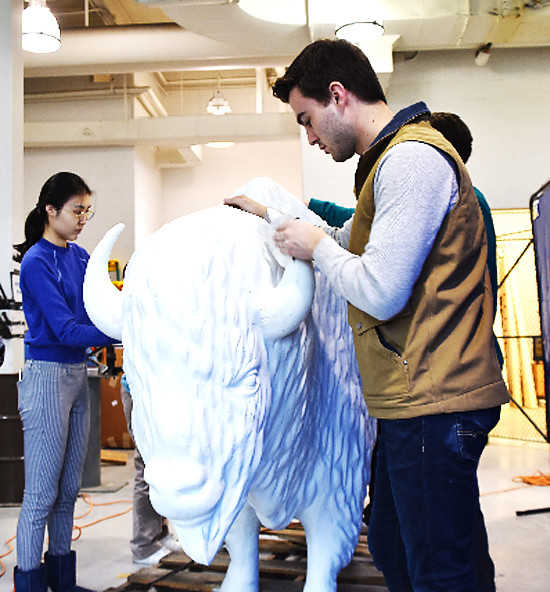 Students Alec Minielly and Shuqi Li work on sanding the fiberglass bison before it is chromed for inclusion in the Putnam County Bicentennial Celebration Sunday afternoon.

"This is fun, Indiana history in our state's bicentennial year, and the bison will be enjoyed for many years to come," Rick Burger, Duke Energy's Greencastle community relations manager, said.

The bison, or American buffalo as it is often called, is prominently displayed on Indiana's state seal. The fleeing bison supposedly represent the wilderness fleeing westward from advancing civilization. The sun rising on the seal shows that Indiana has a bright future. The woodman represents civilization subduing the Indiana wilderness.