What started as a denied credit card at a local store quickly escalated into a confrontation with employees and other customers, an alleged theft and police involvement.

Things escalated further when police arrived at the home of Jeffrey Hunter Saturday afternoon and he shot a Cloverdale officer following a brief confrontation.

The incident reached a new level of seriousness for Hunter on Tuesday when Putnam County Prosecutor Tim Bookwalter filed a Level 1 felony charge of attempted murder against the 48-year-old Greencastle man.

A Level 1 felony carries a sentencing range of 20-40 years in prison with an advisory sentence of 30 years. If convicted, Hunter would have to serve a minimum of 75 percent of the sentence.

A Level 6 felony carries a range of six months to 2-1/2 years. Class A misdemeanors are punishable by up to one year, while Class B misdemeanors have a sentence of up to 180 days.

According to court documents, the end of Hunter’s double-barreled shotgun was about a foot from the chest of CPD Officer Luke Brown when he fired.

Brown’s ballistic vest absorbed the blast, and the officer was able to return fire, striking Hunter in the left side.

A two-year veteran of CPD, Brown administered first aid to his alleged assailant until medics arrived.

The officer was taken to a Terre Haute hospital, where he was treated and released later Saturday evening.

The incident apparently started with Hunter attempting to buy a $369 chainsaw at Tractor Supply Co. on Greencastle’s east side. An employee had retrieved the Jonsered CS 2255 machine from the case for Hunter, but when he attempted to pay, his credit card was denied.

“Hunter threw a piece of paper at the cashier and told her to call the bank, that he was taking the chainsaw,” Curtis wrote in his report.

Both Hunter and the cashier then grabbed the chainsaw, Curtis reported. Two customers then also attempted to intervene by holding Hunter down.

Curtis wrote that Hunter was able to push the customers off him and continued toward the door with the chainsaw. He allegedly struck another female store employee who tried to stop him.

At this point, the clerk called the police to report the theft, giving his identity, as he had dropped his wallet on the way out the door.

Putnam County Sheriff’s Department Lt. Donnie Pettit caught up to the customer following Hunter and activated his emergency lights. Pettit then followed Hunter from about a half mile back.

Losing the ability to see the pickup due to heavy dust, Pettit began to follow the trail of dust until it stopped suddenly on County Road 375 South. He noticed tire tracks in the gravel road that turned to the left and led to the back yard at 4449 E. CR 375 South.

Pettit parked in the driveway and found the red Chevrolet pickup he had been following parked in the back yard. Unaware of the suspect’s whereabouts, he awaited the arrival of backup.

Meanwhile, Greencastle Officer Darrel Bunten arrived, as well as Officer Brown and Deputy Elizabeth Campbell. All four officers on the scene could hear a loud verbal argument from within the residence.

In response to the yelling, Brown and Campbell quickened their pace to the front door.

Hunter appeared in the front glass storm door and Brown repeatedly asked him to step outside to talk to them. Hunter opened the door, but was uncooperative, arguing and complaining loudly.

Hunter was standing at the threshold of the front door with the double-barreled shotgun leaning in a corner next to the doorway. Brown grabbed Hunter’s forearm, with the suspect pulling back and dragging the officer into the house. After a brief struggle, Brown fell backward out the front door.

Campbell was about to engage Hunter with a taser when she saw him reaching for the shotgun. He leveled the shotgun and fired it from about a foot away from Brown’s chest.

Retreating from the door, Brown fired two rounds from his pistol, hitting Hunter once in the side.

Brown then talked Hunter out of the residence and first aid was rendered. 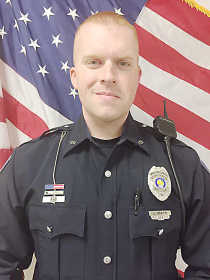 Georgia Hunter told detectives she and her son had argued because after she noticed police outside, she wanted to go outside and talk to them. Jeffrey argued that he didn’t want her to go outside and that the police “would just go away.”

In the aftermath of Saturday’s shooting, multiple authorities said that given the nature and range of the blast, Brown’s ballistic vest undoubtedly saved his life.

Although he has been cleared to return to work, Officer Brown has been placed on paid administrative leave until the completion of the investigation into the police action shooting.

Following Saturday’s incident, Hunter was airlifted to an Indianapolis hospital, where he remained as of Tuesday morning.

On Tuesday afternoon, ISP Sgt. Joe Watts reported that detectives were in possession of a Putnam County arrest warrant for Hunter.

ISP has constant monitoring of Hunter until the conclusion of his medical treatment.

Felony charges and a date in Putnam Circuit Court await him upon release.