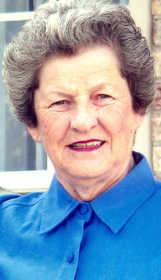 Born Aug. 28, 1932 in Rockville, the daughter of Elbert and Frances (Dillinger) Irwin.

She was a graduate of Greencastle High School.

Marjorie was a homemaker and a member of the Long Branch Church of Christ.

She was preceded in death by her parents; husband, Herman Wallace; brothers, infant Francis and Robert Irwin; and sister, Lethea Cofer.

Funeral services will be conducted at 2 p.m. Sunday, Dec. 18 at Hopkins-Rector Funeral Home, Greencastle, with interment to follow at Pleasant Hill Cemetery.

The family will receive friends from noon Sunday until time of service at the funeral home.

Memorial contributions may be made in Marjorie's memory to the Alzheimer's Research.