INDIANAPOLIS — The Indianapolis Colts, the Indiana High School Athletic Association and the Indiana Football Coaches Association recognized 26 outstanding student-athletes with the 2016 Indiana Academic All-Stars Award presented by American Family Insurance prior to the game against Houston on Sunday.

David Flannelly of North Putnam and Jonah Sanders of South Putnam were among the 26 players honored by the Colts.

Both are strong candidates to be their school’s valedictorians upon completion of the school year.

This marks the 18th year the Colts, the IHSAA and the IFCA have partnered to present this annual award to Indiana’s top football student-athletes.

American Family Insurance — the Madison, Wisc.-based insurance company dedicated to inspiring and protecting the dreams of local high school students, their families and communities — is sponsoring the award for the third straight football season. 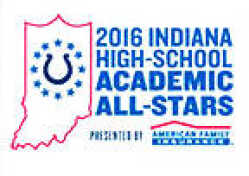 The IFCA polled high school head coaches around the state, and the coaches tabbed 26 athletes ranked in the top of their respective classes. Of the players selected, there are 18 valedictorians and 6 salutatorians, and all 26 players are in the top 1.5% of their graduating classes.

“Congratulations to the 26 outstanding student-athletes who were selected by our committee to represent their schools this past football season. Special thanks to the Irsay family and the Indianapolis Colts’ organization for their continuing support of Indiana high school football,” said Toby Jacobs, who is part of the IFCA Colts Academic All- State Committee.

“Congratulations to the 26 exceptional student-athletes for their tremendous work on and off the field. These student-athletes have achieved great success in the classroom and on the field by demonstrating dedication, leadership and teamwork. Qualities in which their schools and communities should be proud,” said Bill Brooks, Indianapolis Colts Ring of Honor member.

“Each of these student-athletes has achieved their own dreams of greatness by demonstrating the qualities that make them stand out both on and off the field. Qualities like leadership, teamwork and academics. They have set exceptional examples for those who follow them, and I strongly encourage each and every one of them to continue the interests they have developed, continue to dream and pursue those dreams,” said Bill Maynard, Agency Sales Manager for American Family Insurance.