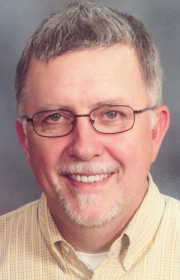 Ron was a 1966 graduate of Oxford High School in Benton County, Ind.

He received his bachelor (1971) and master (1977) of science degrees from Purdue University. He majored in physical education with a minor in social studies.

He spent his 41-year teaching career with the North Putnam Community School Corporation. He initially taught social studies at the high school, then took the opportunity to teach seventh-grade social studies when the middle school opened.

While at Purdue, Ron enjoyed being a student manager for the Boilermakers' football team. He participated in the spring workouts with the team. He also was proud of his time as a member of the Purdue Soccer Club.

Ron coached many sports through his years at North Putnam. He started in 1972 as the junior varsity football and assistant basketball coach. He was the varsity volleyball coach for 15 years and then returned to coach football, as the middle school coordinator and eighth-grade coach.

Ron introduced high school soccer to Putnam County in the mid 1980s. North Putnam was the first local school to have a soccer team.

He was passionate about the projects of these organizations and had big ideas to improve communication and awareness. Ron was humbled to be named an Honorary Alumnus to North Putnam Community School Corporation. He was also a proud member of the Purdue Club of Putnam County.

Ron loved his church family. He was a longtime member of Greencastle Christian Church and served in several capacities through the years.

He is survived by his wife, Susan; his sisters, Sandra Mills and Janet (Paul) Chovan; his nieces, Heather Mills, Emily (Chovan) Polak and Esther Chovan; his nephews, Matthew Mills, Josh Chovan and Caleb Chovan. In addition, he had several "God" children that he loved dearly.

He was preceded in death by his father and his brother-in-law, Bruce Mills.

Ron, or as many continued to call him "Mr. Price," was a compassionate man. He loved teaching and coaching for all of his 40-plus years. He loved meeting up with his former students and catching up on what they were doing. He cherished his time with his family and precious friends.

Funeral services will be conducted at 11 a.m. on Friday, Jan. 20 at Greencastle Christian Church, 620 Primrose Lane. Interment will follow at Brick Chapel Cemetery.

The family will receive friends from 4-7 p.m. on Thursday, Jan. 19 at Greencastle Christian Church.