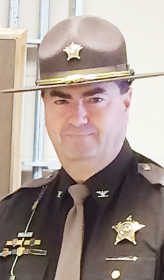 CLOVERDALE -- Six Cloverdale residents were present to express their desire to have Interim Marshal Charlie Hallam made full marshal and other concerns about the Cloverdale Police Department during the Cloverdale Town Council’s regular meeting on Jan. 10.

“Why are we even searching for a town marshal when we have a town marshal?” Jackie Hoffa, a custodian at Cloverdale Schools, said. “They know our school from the top to the bottom. You’re not going to have to train someone. He knows every nook and cranny.”

Firefighter Scott Haywood expressed similar feelings, saying, “I have four daughters in that school. Every one of them knows who this man is, and (Officer) Luke (Brown). They all know who they can turn to. That’s three more generations over there that look to this man as a leader in the community.”

He went on to point out that Interim Marshal Hallam is also well-known in the surrounding area, but that not everyone would like him because he’s enforcing the law.

“The people that I’m speaking for here today would like to see the Cloverdale Police Department fully staffed,” Day said. “We’d like to see another full-time police officer and at least three to five reserves.”

Chastity Sanders, EMT personnel and a former reserve officer trained by Interim Marshal Hallam, said, “I can honestly say without reserve that he deserves that position more than anybody and would be the best fit for it.”

After all audience members had spoken, President Coweta Patton said, “Everyone has a right to their opinion, and we appreciate it.”

In answer to a question from Haywood, it was answered that Chief Deputy Phil Parker had been approached by President Patton, Larry Fidler, Clerk-Treasurer Cheryl Galloway and Town Manager Wayne Galloway.

“The council did vote on it,” Fidler said. “It was unanimous.”

President Patton also explained that only two council members went because to have three would have been a quorum, which meant that it would have had to be a public meeting.

Chief Deputy Parker was then allowed to speak in answer to the residents’ concerns.

“I’ve come to appreciate and listen to people’s varying opinions on varying topics. They have a right to voice those opinions,” Chief Deputy Parker said, “and if you’re in a position as I am in, it’s not only wise but incumbent upon you to listen.

“I met with Charlie and Luke the night before the council voted on retaining me to do this. And Charlie and I both agreed on several things. There are many aspects to being a town marshal that the citizenry doesn’t even see; in terms of policy, in terms of how you do things, how you manage the overall administrative operations of your agency. And those things are just as important as what these men do out on the street because what they do on the street can only be validated by how it’s managed behind the scenes.

“Trust me, this town can get sued just as quickly as IMPD can for a misstep by your police agency or a lack of policy that follows case law, federal guidelines, state law. Charlie and I agreed that there as some things that we need to do on the administrative part of this that I can be of service and help with. Charlie accepted and, quite frankly, told me he was glad, that would come down here and assist him with that part of this.

“I’m here to help whoever winds up in that job for as long as this board will have me and as long as I can be of assistance to your new town marshal in building their police department from an administrative standpoint.”

“The reason I’m here ... the town board wanted to remain neutral in this because it can be a political firestorm,” Chief Deputy Parker continued. “I have no reason to try to cause Charlie Hallam or any other applicant to this position harm. I wasn’t looking for a job when I got this one. While the board approached me on this, I am not beholden to them in terms of what they want and what they don’t want. I made that very clear to them. Whoever I bring to them, it’ll be simply because that’s who I felt with 34 years in law enforcement, was the best person for that position.”

After speaking with Chief Deputy Parker after the meeting, Hoffa said, “I asked him if he’d visit our school corporation and talk to our administrators and our superintendent. I feel good on this part because I believe he will.”

In answer to a question from Haywood, Clerk-Treasurer Galloway said that it would be a month or two before the council would know how many more officers the town could afford to hire.

-- Officer Luke Brown: Interim Marshal Hallam reported that Officer Brown had returned to duty and that all was back to normal.