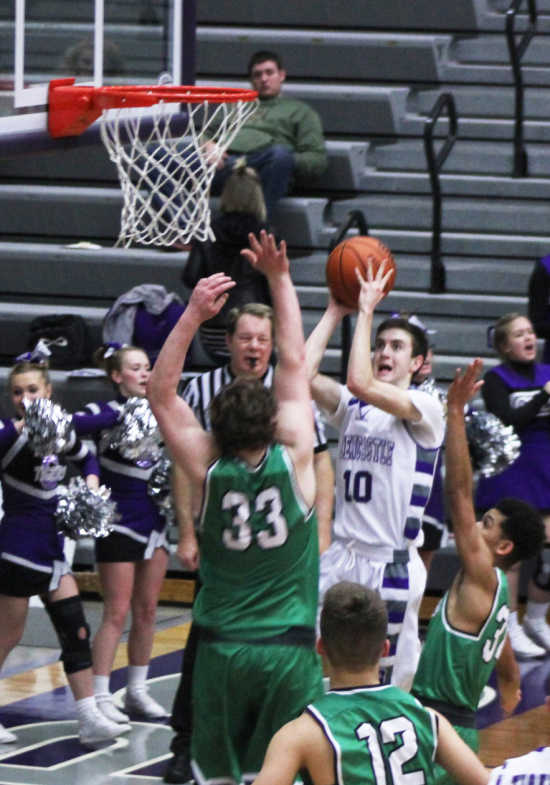 Greencastle kept the tempo at its pace for three-fourths of Tuesday night’s boys’ basketball game against visiting Cloverdale, not wanting to get into a run-and-gun shootout with the high-scoring Clovers.

The tactics worked, as the Clovers only led by one point on two occasions during that period until late in the third quarter.

The 1-2 combo of Cooper Neese and Jalen Moore proved to be too much in the fourth period, however, as the Clovers pulled away for a 46-34 win to get their 12th victory in their last 13 outings. 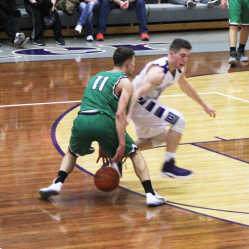 Cooper Neese fakes a drive to the basket against Devin Clar of Greencastle.
Banner Graphic/Joey Bennett

Neese hit two 3-pointers, one 2-pointer and a pair of free throws in the final period while Moore hit six of six free throws — including four of four in the final 57 seconds to put the game away. 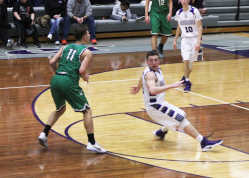 Cooper Neese steps back behind the 3-point line after faking a move to the basket.
Banner Graphic/Joey Bennett

“Their halfcourt defense just gives you one shot, and they’re going to try to keep you out of the paint,” Cloverdale coach Patrick Rady said. “The low score in the first half was a result of them playing the gaps well. We were able to do some things in the second half to do what we wanted to do, and our shots started falling. We were used to getting a lot of possessions and they didn’t let that happen.” 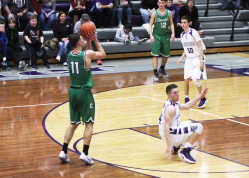 Cooper Neese finishes off the move by hitting a 3-pointer from the top of the key.
Banner Graphic/Joey Bennett

Neese had seven points and Moore added two in the first period, but the Tiger Cubs got alternating baskets from Colin York and Nick Costin — the last one being a York trey with 1:00 left in the period that gave the Tiger Cubs an 11-9 lead at the first stop.

The Clovers did not get a basket in the second quarter, relying on six Moore free throws. The Tiger Cubs matched that low output with treys from Alex Costin and Nick Costin, and stayed ahead 17-15 at the half.

Things opened up a little more in the third period, as Neese had five points and the Clovers also got treys from Moore and Nick Winders in the period. A basket by Greencastle’s Gavin Bollman with 1:41 left in the third quarter gave his team its final lead at 27-26, and Moore added a basket for the Clovers later in the period to put them ahead for good.

“This is a tough stretch for these guys, and I think our legs were a little tired and our shots fell a little short,” Greencastle coach Bryce Rector said. “That’s a good team, which put up 94 points the other night, and we held them to 15 in the first half. They hit some free throws, and Cooper is Cooper — he’s going to do what he does.”

Rector thought he had to have his team control the pace of the game, and was quite successful in that tactic.

“We slowed it down some because we didn’t think we would be in a position to win in the fourth quarter if we played up and down with them,” Rector said. “You have to give them credit defensively. They did a good job on some of our guys, and if we get the chance to play them again we’re going to have to figure out things where we can try to score better on them.”

Moore added 19, and while he only hit two field goals he was 14 of 14 from the line — as the Clovers didn’t miss a free throw all night.

Teams know they need to avoid fouling Moore, a 74-percent free throw shooter, but that task is easier said than done.

“He’s one of the best we will play this year creating off the dribble,” Rector noted. “He’s very crafty, and the coaches did a good job of getting him the ball in good positions. He is very difficult to guard.”

Rady noted that Moore’s ability to slither through defenses and draw fouls does not come by accident.

“Jalen works on his ballhandling and his individual moves quite a bit,” he said. “He takes that seriously. He changes speeds as well as anyone I’ve ever coached, and it’s hard to adjust to him when he gets you out of position.”

The Tiger Cubs will continue their busy schedule this weekend, playing at Brown County in the Western Indiana Conference crossover game on Friday and hosting powerful Tri-West on Saturday.

“This is a busy time, but it’s a fun time for our guys,” Rector said. “Brown County has a 6-10 guy we will have to prepare for, and Tri-West is an outstanding team.”

Rady’s team will only play seven of 24 regular-season games on its homecourt this season, and his team is looking forward to Friday’s homecoming crossover game with Sullivan.

“It will be different not getting on a bus,” he joked. “We are looking to playing at home, especially since it’s our last Friday night home game and it’s homecoming.”

The Clovers finished third in the WIC East Division, and will likely find the style of Friday’s game more to their liking.

“Sullivan will be a good test for us,” Rady said. “The pace of the game will definitely be more our style, but we can learn from games like this when the pace isn’t how we want it to be.”