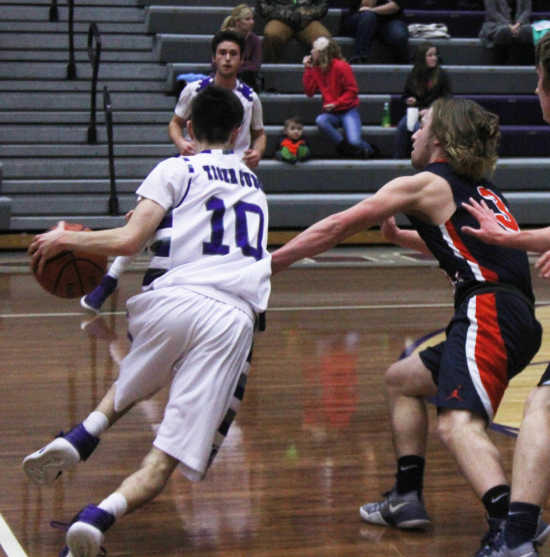 Colin York of Greencastle goes to the hole against the defense of North Putnam’s Duke Duff on Thursday night.
Banner Graphic/Joey Bennett

Bryce Rector specifically challenged two of his players before Thursday night’s game with North Putnam in the Putnam County tournament.

The Greencastle coach told junior guard Colin York he needed to step up offensively, after a subpar performance in a loss to the Cougars earlier in the season.

Rector also challenged sophomore center Gavin Bollman to rise to the challenge against North Putnam standout post player Elliot Gross, who Rector said “had his way” with him in the first meeting. 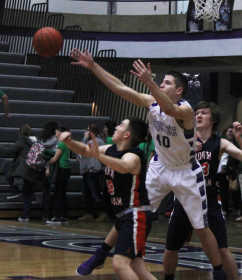 York scored 31 points to lead the Tiger Cubs offensively in a 56-51 win over the Cougars, while Bollman led a strong defensive effort that limited Gross to five first-half points.

“We were not very happy with Colin’s performance the last time, and as unhappy as we were he was even less happy,” Rector said. “That’s the kind of kid he is. We told him the game rested on him, and he put us on his back and carried us.”

If there is a statistical guideline for the relationship between points and shots attempted, York was off the charts. He attempted just 14 shots to get more than twice that many points, hitting nine field goals (five of seven from behind the arc) and eight of nine at the line.

“People see what he does out here on the court,” Rector said. “But they don’t see what all goes into it. This is a kid who comes in three days a week during the season at 6 a.m. to shoot and get better.

“He definitely puts in the work, and it’s great to see a kid who works that hard have the showing he did and see what he can accomplish,” Rector added.

Making York’s efficient display even more impressive was the fact that none of the shots came easily against the defense of North Putnam’s Duke Duff.

“Coach [Collin] McCartt had a great game plan the first time against us and Duff did a great job on Colin that night,” Rector said. “He really did a decent job again in this game, but Colin was just really good.

Bollman hauled in 14 rebounds to go along with eight points.

The first quarter was played to an 11-11 standoff, and the Cougars used a strong second-period performance to assume a 25-22 lead at the intermission.

The third period, however, was all Tiger Cubs.

Porter put NP ahead by five with a basket to open the second half, then Nick Costin and York hit back-to-back treys and J.T. Matthews hit a pair of free throws to give Greencastle a 30-27 lead.

A trey and a two from York gave Greencastle a 48-39 lead with 5:15 to play. Nobody left for the exits, though, knowing that any McCartt team will never give up hope.

The Cougars used a 10-2 run to pull within one at 50-49 with 1:44 left. Matthews hit both ends of a clutch one-and-one opportunity with 53.2 seconds left, and improving sophomore Andrew Pickel matched them on a basket with 29 seconds left.

McCartt was hurting for all of his players after the loss, but especially for one small segment of the team.

“I feel badly for our seniors, not being able to play for a championship,” he said. “We missed some help opportunities on York, and he stepped up and hit some big shots. He’s a great player, and I think Duke still did a good job on him.”

McCartt also thought his team had some bad offensive possessions.

“Their size bothered Elliot a little bit, and they did a good job on him,” he added. “We knew it was going to be a battle. We beat them the last two times over here and we knew they would be ready.”

McCartt thought his team missed some opportunities in the first half to extend its lead further than it did.

“We played hard,” he said. “Give them credit. Bryce has done a great job with them. The way they play, they’re going to be a tough out in the tournament.”

No other Tiger Cubs reached double figures, although Matthews matched Bollman’s total with eight points of his own.

Porter had 16 to lead the Cougars while Duff had 13 and Smith contributed eight.