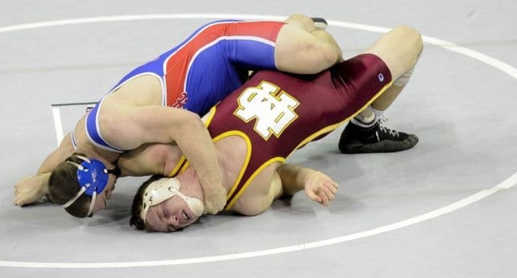 After dominating four straight matches to win the semistate title and defeating the only opponent in the field ranked higher than him, Shaffer emerged with a 46-0 record and firmly entrenched as one of the favorites for next weekend’s state finals at Bankers Life Fieldhouse in Indianapolis.

The top four wrestlers in each class from the four semistates will take part on Friday evening in first-round action, with the winners moving on to Saturday’s final rounds.

Greencastle’s Trace Thomas won his first-round match at Evansville on Saturday, but was eliminated in the second round — one win away from a state finals trip.

Shaffer won his first two matches by pins in very short order — topping Aaron Brievogel of Gibson Southern (24-19 record entering the day) in 1:27 and Deion Cooper (27-14) of New Albany in 1:22.

Having already qualified for the state finals at that point, Shaffer went on to rout 28-2 Kurtis Wilderman of Evansville Mater Dei — the wrestler ranked one spot ahead of Shaffer — by a 15-4 major decision.

Shaffer then met Jack Michel of Southridge, who entered the day with a 49-3 record, and won the semistate title with an 11-0 major decision.

“He wrestled really well,” South Putnam coach Josh Hendrickson said. “He had a big match in the semifinals over the kid ranked fifth.

“I was really happy with that match,” he added. “The kid was the defending semistate champ and he’s a really good wrestler.”

Hendrickson was not surprised with Shaffer’s performance.

“I really thought he could do that well,” he said. “He did everything that he should have done.”

The 37-6 Thomas, a sophomore making his first semistate appearance, won a 3-2 decision in the first round over Clay McNutt of Castle (29-12).

In the second round, Thomas was matched up against Tucker Schank of Southridge (45-7).

“He won his first one, and had his match won in the second one until the very end,” said Shane Thomas, Trace’s coach and father. “It was a pretty hard-fought match. He had a couple of takedowns that happened to be just out of bounds. Within the last 30 seconds, the other kid ended up getting a takedown.”

The result was a 5-3 win by Schank, also a sophomore.

Shane Thomas was pleased with Trace’s performance and knows he can build on it for the future.

“He wrestled really well for the day,” he said. “It was just a good experience for him overall. It was nice that a few of his teammates came down to watch him — they are wanting to get there next year.

“He knows what he has to do, and will work hard to get to the state finals.”

Shaffer will open state finals on Friday against David Delph of Frankton, who has a 39-4 record, needing four straight wins for a state championship. 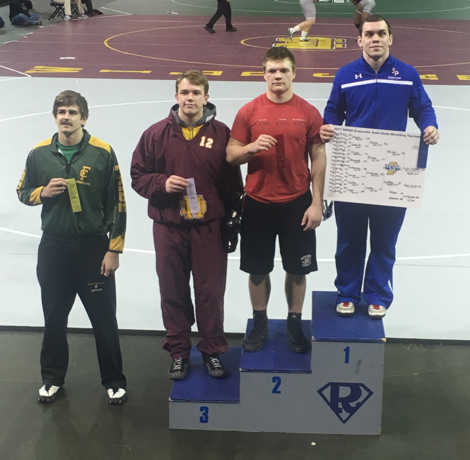 South Putnam's Kyle Shaffer poses on the medal stand along with Jack Michel (second place), Kurtis Wilderman (third place) and Bradley Philpot of Floyd Central (fourth place).
Contributed photo
Comments
View 2 comments
Note: The nature of the Internet makes it impractical for our staff to review every comment. Please note that those who post comments on this website may do so using a screen name, which may or may not reflect a website user's actual name. Readers should be careful not to assign comments to real people who may have names similar to screen names. Refrain from obscenity in your comments, and to keep discussions civil, don't say anything in a way your grandmother would be ashamed to read.
Respond to this story