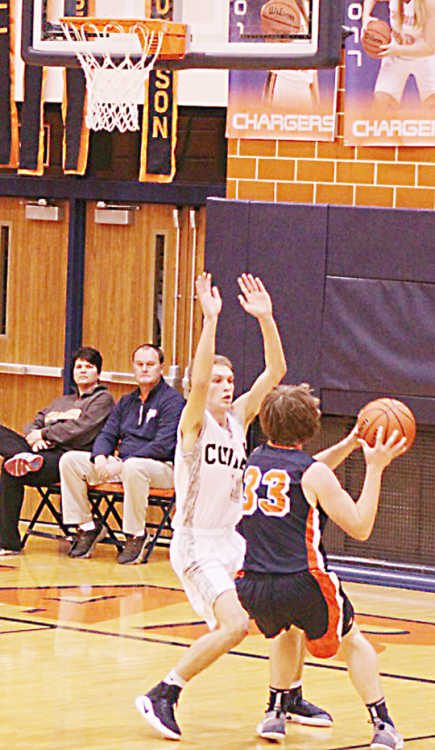 As a result, the fact that the game was tied with 26 seconds left was not a surprise.

Despite trailing by six points with less than a minute to go, North Putnam was able to put forth a tremendous late comeback and escape with a 63-61 win.

“That was just guys making plays,” NP coach Collin McCartt said. “Our guys never gave up. It was a frustrating night in many ways, and it was a very physical game. We just keep getting better and making big plays.

The first three quarters were played pretty evenly, with the Chargers leading 45-44 at the final stop.

After Treyton Smith put North Putnam ahead with a trey just 22 seconds into the final period, the Chargers ran off nine straight points to lead 54-47 with 5:02 to play.

The Cougars whittled away at the lead and cut the gap to 59-55 on a pair of Elliot Gross free throws with 1:01 left. North Montgomery’s Mitch Merica matched those free throws with 50.2 seconds left to restore the lead to six at 61-55.

North Putnam was going to need several things to happen in a short amount of time to pull out the win, and got them.

Duke Duff hit a clutch 3-pointer with 40.1 seconds left to cut the Charger lead in half, and North Putnam immediately identified senior Ben Dugard -- a 30-percent free throw shooter -- as the target of a quick foul.

Dugard missed the bonus opportunity, and Corbin Judy hit another trey from the top of the key with 26.1 seconds left to tie the score.

Merica missed a 3-pointer with about seven seconds left, and NP’s Gross hauled in the rebound. He got the ball ahead to Preston Porter, then sprinted downcourt and took a pass back from Porter for a layin over the front of the rim. North Montgomery got off a halfcourt short at the buzzer after a timeout, but the attempt was off and North Putnam had the victory.

“I just like to let guys play at the end and not run too many sets down the stretch,” said McCartt, in reference to pushing the ball upcourt after the key rebound and not calling timeout. “Duke and Corbin both hit huge shots down the stretch, and Elliot had a great pickup there at the end. We were able to defend the last shot well.”

Both teams have scoring averages in the mid-50s for the season, so the 20-19 Charger lead after one quarter was out of character for both teams. North Putnam had a 9-0 run early in the second period to take a 28-22 lead with 4:45 left in the half, but the Chargers scored the last nine points of the half to take a 35-31 lead into halftime.

Gross had 11 of his game-high 25 points in the third period for the Cougars as they pulled within one at 45-44 entering the fourth quarter.

The Cougars found themselves in foul trouble, one of the frustrating factors on the night, but McCartt was able to go to his bench for solid support.

McCartt had praise for the Chargers, playing under first-year coach Eric Danforth.

“Their style is about 180 degrees different than the last few years,” he said. “I didn’t think many teams could cause us problems by running, but they definitely did. They have a couple of guys who can hit shots, and they are tough to defend.”

Porter added 11 points for the winners while Smith had 10 and Duff added nine.

The Cougars improved to 9-12 with the win, and will close out their regular season by playing at Covington (a team North Montgomery beat) on Friday and hosting Christel House Academy on Saturday for senior night and homecoming.