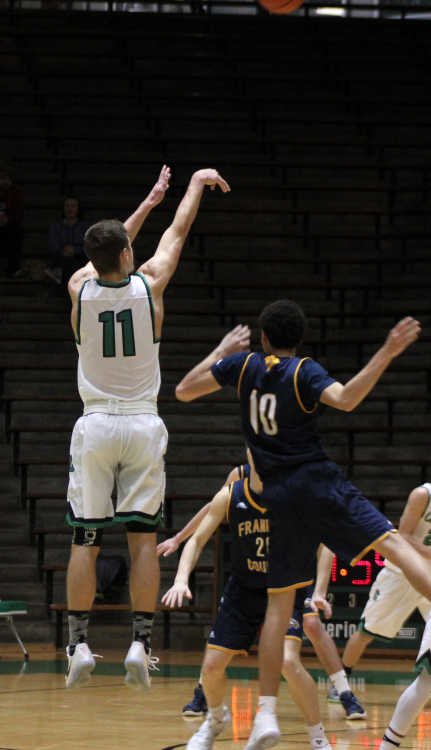 The Cloverdale standout is both modest and humble, and while I haven’t yet brought up the subject of his career accomplishments we’ll talk about it whenever the team’s season is over.

Neese currently stands with a career total of 2,376 points, placing him 12 points away from passing former Marion and current Indiana University standout James Blackmon Jr. for ninth place. That should happen sometime in the second quarter on Saturday night as the Clovers host Shakamak for their Senior Night festivities.

A few of the names still ahead of Neese on the list – such as Blackmon Jr. – are still active in college basketball and are recognizable to today’s high school competitors. Others may be names they have heard of, but don’t know much about, while another segment of the list likely contains complete unknowns.

Here is a look at the top nine players on the list:

I saw Bailey play several times in high school, with two of the most memorable games being one of his seven losses during high school at Terre Haute South and seeing him and his team barely escape an upset bid by Terre Haute North before 10,000 fans in Terre Haute’s Hulman Center. Bailey was best known for his rare basketball savvy for such a young player, and the fact that he tops this list is not surprising considering how ready he was (mentally and physically) from Day One. He wasn’t a tremendous shooter, but he was a scorer. His ability to drive to the basket and draw fouls (some legitimate, many courtesy of referee worship) allowed him to score an unusually high percentage of his points at the free throw line.

How popular were Bailey’s teams “back in the day”? The team’s die-hard fans would buy a season ticket at every school where the Stars were going to play road games to safeguard against ticket sales being cut off due to capacity limits being reached. Don’t see that happen anymore.

Bailey had a standout career at Indiana, a decent professional career in the NBA and CBA and is now a women’s assistant coach at Butler.

2. Marion Pierce (Lewisville, 1961) with 3,019 points – As a longtime sports fan with decent knowledge of Indiana history, I am ashamed at how little I know about this guy. I had to look up that Lewisville is in southern Henry County (home of New Castle and the Indiana Basketball Hall of Fame). Somehow, he wasn’t inducted into the Hall of Fame until 1990 – just days before his career record was broken by Bailey. I can’t tell from the information I have found whether he was a big man or a guard, but the fact that he racked up that many points in the era prior to the 3-point field goal is impressive. He earned junior college All-American honors at Lindsey Wilson College in Kentucky.

3. Deshaun Thomas (Fort Wayne Bishop Luers, 2010) with 3,018 points – The 6-7 forward had his worst year of high school as a sophomore when he averaged 28.6 points and 12.1 rebounds per game, down from 29.0/13.3 as a freshman. He averaged over 30 points and 15 rebounds per game for his final two seasons, then went on to play collegiately for Ohio State. He averaged 19.8 points and 5.9 rebounds in his junior year with the Buckeyes and left early for the NBA draft, being chosen late in the second round. He never played in an NBA game and has played overseas since 2014.

4. Brody Boyd (Union-Dugger, 2000) with 2,632 points – I coached against Brody as a 10-year-old on a rival travel team, and his appearance on this list is no surprise despite few people having seen him play in high school. His situation is similar to Bailey’s in that he played regularly for all four years of high school, helpful to make this list. Boyd did not have a great supporting cast in high school and was not shy at putting up shots. His team did not play the greatest regular-season schedule, which undoubtedly helped his total.

That fact is countered with the heavy attention he drew from opposing defenses, and the fact that he was only 5-11. Boyd got a scholarship to attend Iowa, and didn’t play much in his first two years but averaged more than 10 points per game over his final two seasons.

5. Rick Mount (Lebanon, 1966) with 2,595 points – Considered along with Steve Alford among the greatest pure shooters in Indiana history, Mount’s total undoubtedly would have been higher had the 3-point line been in play. Mount (a 6-4 guard) had a great career at Purdue, finishing as runnerup for National Player of the Year to both Lew Alcindor and Pete Maravich. I can barely remember him playing for the Indiana Pacers.

6. Trevon Bluiett (Park Tudor, 2014) with 2,568 points – Bluiett is a 6-6 junior swingman for Xavier who was a first-team all-Big East Conference selection last year. He led Park Tudor to three state championships and averaged 35.7 points and 11.4 rebounds as a senior.

7. Billy Shepherd (Carmel, 1968) with 2,465 – Also a little before my time, Shepherd played at Carmel for his father (Bill Sr.) and then at Butler, where he averaged 27.8 points per game one season. He played for three years in the American Basketball Association.

8. Alan Henderson (Brebeuf Jesuit, 1991) with 2,419 points – Henderson would have led Brebeuf to a state title in 1991 if the Braves’ opponent in the championship game was not Glenn Robinson-led Gary Roosevelt. He had an excellent career at Indiana, and earned more than $50 million in 12 NBA seasons.

9. James Blackmon Jr. (Marion, 2014) with 2,387 points – Blackmon Jr. played three seasons at Fort Wayne Bishop Luers before transferring to Marion in his senior year when his father was named head coach. Scores 16.8 per game this year at Indiana – although he is widely criticized for his defense. He averaged more than 15 points per game for his first two years at Indiana University.

Does that make Neese one of the 10 best players of all-time? It’s a matter of opinion. Despite scoring more than twice as many points in high school as Bird, nobody would rate Neese ahead of the NBA legend.

Does having Jalen Moore as such a capable sidekick help or hurt Neese on this list? Maybe both. They both owe some of their success to the other.

Moore can obviously take over a game at any point and has outscored Neese on several occasions this season. Could Neese have scored a ton more points this year with nightly Southmont-like performances if Moore weren’t around? Sure, although other teams probably would have two defenders assigned to him in that situation. Anybody wearing Cloverdale green knows their team wouldn’t be as good if that were the case, though.

The Clovers also had a great supporting cast for the first two years of Neese’s career with players such as Brantson Scott, Marquise Moore and K.J. Coleman, which may have also cut down on his early numbers.

Does any of this matter? Not that much. Neese would gladly trade his spot on this list for another sectional championship in a heartbeat, if such an exchange were actually possible.

Let’s all just enjoy this ride for whatever time it has left, and then speculate on whether any of us will ever see anything like this again. We should all be so lucky.

The IHSAA sectional draw will take place on Sunday.

The local media-friendly schedule has all four Putnam County teams playing at sectionals taking place within the county borders.

Greencastle will host Class 3A Sectional 25, while Cloverdale and North Putnam will both play in Class 2A Sectional 44 at South Putnam.

Here is a brief look at each field:

Greencastle – Tri-West has the best record at 17-3 and is likely considered the unofficial “tourney favorite.” Crawfordsville has a 13-6 record, while Lebanon is 11-10 – but is responsible for one of the three Tri-West losses. Greencastle and North Montgomery each has won seven games, against 12 losses, while Frankfort is 6-14 and Western Boone is 5-13.

South Putnam – Cloverdale has by far the best record in the field at 17-6, but is hardly a lock to repeat its sectional title. Cascade (12-8) has a high-scoring team which only lost by two points to Cloverdale earlier this season, while Monrovia (11-8) has high-scoring guard Luke Smith and some good size.

The Clovers edged Monrovia by three points in overtime in a game when the Bulldogs thought it was a good idea to let Neese shoot a wide-open 3-pointer at the buzzer.

Then there is Southmont, a team with high-scoring guard Cam Chadd and versatile big man Caleb Swick which beat the Clovers 83-69 in December despite Neese’s 53-point outing. North Putnam (8-12) and South Putnam (5-13) have had their moments this year and are good at controlling tempo.

Both tourneys should be interesting. See you there. First-round play starts Feb. 28.

• Danville’s girls are the only opponent of local teams who emerged as regional champions on Saturday.

• Edgewood’s Cooper Bybee recently set a school record with a 48-point game against Eastern Greene. Hard to believe there is not more college interest in him or Monrovia’s Smith. Colleges need to recruit the best shooters and teach them how to play defense if they can’t.

• Grant McVay has stepped down as boys’ varsity basketball coach at Turkey Run.