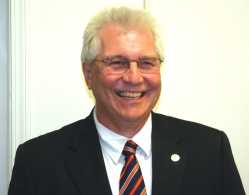 BAINBRIDGE -- Amongst rumors and much conjecture concerning the status of its superintendent position, the North Putnam school board received a short but impactful letter, made public Thursday at North Putnam’s monthly public session.

The missive was written by current superintendent Dan Noel, who had until recently been at the center of an uneasy search for his replacement.

While the circumstances remain unclear, Noel initiated a slow-moving search on Nov. 16 when he formally delivered a letter containing the intent to retire on June 30, coinciding with the end of the 2016-17 school year and well before his original contract-end date of June 30, 2018.

However, after the formation of petitions appealing his departure, negative feedback from the community, a serious time crunch and a stagnant search that made the situation cloudy at best, Noel was formally reinstated via unanimous decision Thursday after the board received his letter, which read:

“I’m requesting that the board of school trustees rescind my retirement from the North Putnam Community School Corporation as superintendent and reinstate my former contract. Thank you.”

The board’s search, which came to an ambiguous halt in January when the council elected to reject the services of the Indiana School Board Association (ISBA), will officially cease and allow Noel to finish his original contract; a cause for which the majority of those in attendance cheered upon the surprisingly-unanimous approval.

Noel’s original contract is set to expire on June 30, 2018, at which time his tenure will either be extended, renegotiated or allowed to end.