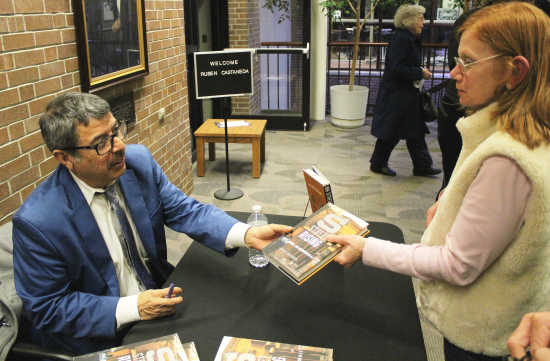 On the very day President Donald Trump called an impromptu press conference essentially to berate the press, an accomplished journalist and author shared his story and an opposing view with a DePauw University audience.

Or more specifically, as Castaneda noted during the question-and-answer portion of his program in Watson Forum of the DePauw Media Center Thursday night, "to delegitimize what the press does." 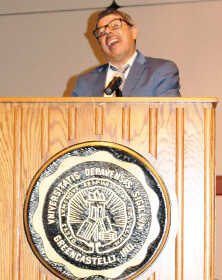 Trump is trying "to shake people's faith in what is reported day to day," the reporter-author added, "which ultimately could be detrimental to society as a whole."

Castaneda, who opened his remarks by saying he thinks journalism today "is more important and more relevant than ever," suggested that "right now all the drama of the White House is sucking up the energies of journalism."

That is translating into a lack of resources for other issues, and at major metropolitan newspapers like The Washington Post, it has meant gutting their local news coverage.

Publishers and newspaper owners insinuate there is no money in covering local news, he said.

"I have no answer for that," Castaneda lamented.

"My hope is that young journalists still understand there are a lot of good stories in local news."

Castaneda brings unique perspective to his role, currently as a reporter for U.S. News and World Report following 22 years on the crime beat with The Washington Post. It was at The Post where he worked with Miranda Spivack, visiting professor of journalism at DePauw University, who arranged for Castaneda's appearance.

In covering the 1980s crack epidemic that turned Washington, D.C., into the murder capital of the country, Castaneda reported on the scandal in which Mayor Marion Barry was embroiled, and ultimately arrested in 1990.

But it was during that time that Castaneda himself became a crack addict. That climate, his story and his recovery are the basis for his book, "S Street Rising."

Joining the newspaper at 28, he found himself "at ground zero for violence and the crack epidemic."

S Street, he said, is where he continued his "descent into addiction" and where he made most of his buys.

His book, meanwhile, is also "a valentine to journalism," Castaneda added.

"My career so far has been a blast," he said. "I can't think of doing anything else. It's such an amazing way to make a living."

But students today, he believes, "may not want to go that route."

Writing his book, Castaneda said, came about as an opportunity after he penned a 2007 magazine article that mentioned his addiction.

"That generated some interest from book agents," he said, adding that he wanted to tell a story that was bigger than his own predicament.

He soon learned that the street and the addicts were protected by "Baldie," the local drug kingpin. Meanwhile, Pastor Jim headed the local church that was in the middle of the combat zone and told the author something he has never forgotten, "Everybody's in recovery from something."

"I had confidence I could rely on my own recollections for a big chunk of the story," he said, adding that he wanted the book to present "a sense of what it was like at ground zero of the most violent city in the country."

He also knew he would have to write about the worst moments of his life, his "most self-centered actions."

Among those was his sexual encounter with one of the so-called "Strawberries," hookers who would help him get his crack along S Street.

Castaneda says he didn't include it in the book just for salacious reasons but to document how horrible the depths of his addiction had taken him.

Once he was able to write that passage, Castaneda said, the rest of the story poured out of him.

His crack addiction lasted 2-1/2 years, he said, until his boss drove him to a rehab center four days before Christmas in 1991.

Since then he's had one relapse -- which he says was scarier than having a gun pointed between his eyes while making a drug buy.

He is off the drugs now, the best of all outcomes a crack user might expect.

"You either quit, end up in jail or die," Castaneda said bluntly.

During the question-and-answer session, Castaneda was asked when the movie of his life's story would be coming out.

He's been approached by agents and others with interest, he said, adding that he envisions it more as a cable miniseries.