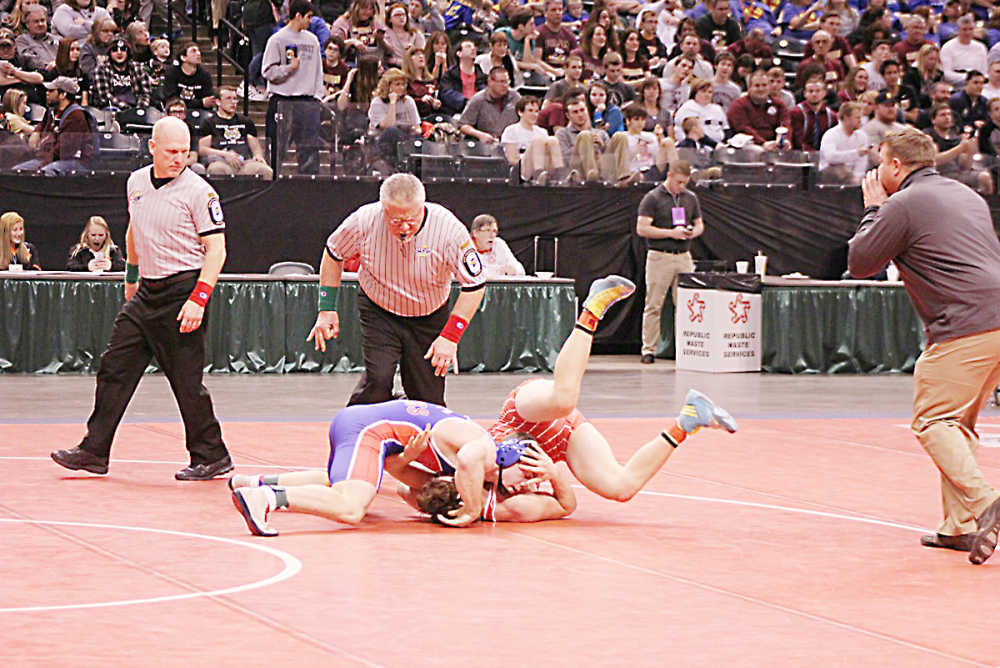 After a pair of second-period nearfalls, South Putnam senior Kyle Shaffer was in position for a major decision over David Delph of Frankton Friday night, but won by fall early in the third period. Shaffer will be back in action in the quarterfinals and beyond today at Bankers Life Fieldhouse.
Banner Graphic/JOEY BENNETT

INDIANAPOLIS -- Kyle Shaffer has been through the IHSAA wrestling state finals before, but the wait to get to wrestle -- especially at the higher weight classes -- is still as long and nervewracking as it was two years ago when he placed sixth.

Shaffer patiently bided his time until one of the final matches of the first round, then disposed of David Delph (39-5) of Frankton on a pin just 16 seconds into the third period at Bankers Life Fieldhouse in the 195-pound weight class.

“It went pretty well,” Shaffer said afterward. “It’s hard to wait that long to get to wrestle, but I was ready.”

Shaffer led 5-0 after one period, and expanded that lead to 12-0 after two periods with a reversal, a three-point nearfall and a two-point nearfall. He was on his way to a major decision when he took Delph down to the mat and finished the match early.

“I had a couple of times earlier when I could have gotten a pin and I let him get away,” said Shaffer, with one of those times seeing Delph literally saved by the bell as the time ran out to end the second period.

Shaffer will advance to the quarterfinal round, which begins at 9:30 a.m. today, where he will meet senior Caleb Hankenson (40-2) of Bellmont. Shaffer was the No. 6-ranked wrestler in the 195-pound weight class in the final rankings by indianamat.com, while Hankerson was ninth.

Hankenson won his first match on Friday by pin in 3:43 over Tyler Moser of Bremen.

The four quarterfinal winners this morning will compete immediately afterward in the semifinal round.

Losers of any of this morning’s matches will fall into the consolation bracket, which begins at 5 p.m. The semifinal winners will compete in the championship round, which starts at 7:30 p.m.

“I can do it,” Shaffer said. “This is definitely winnable.” 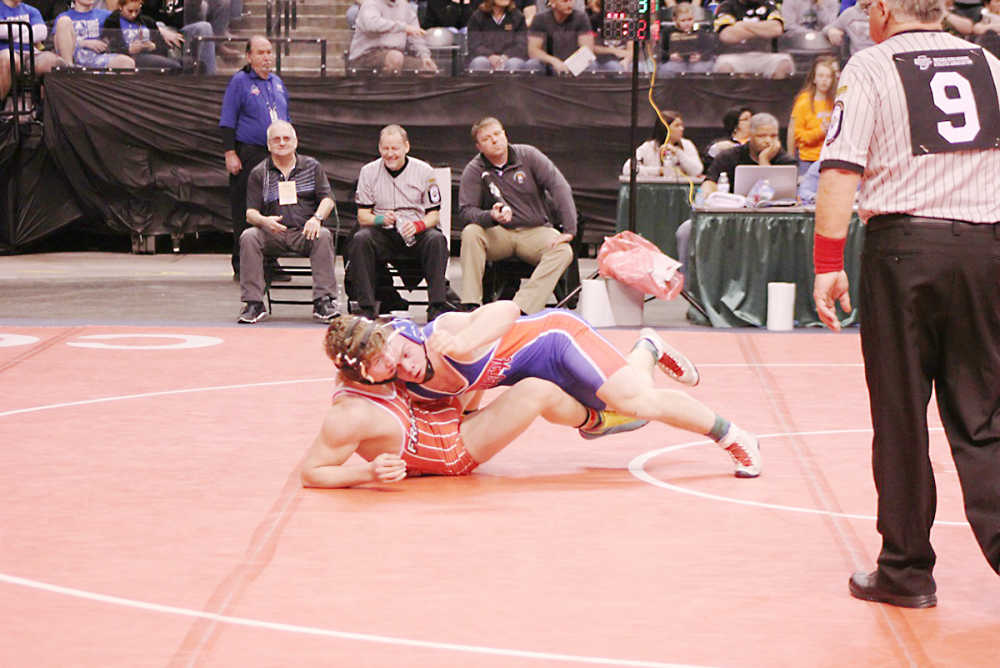 Banner Graphic/JOEY BENNETT
Comments
View 1 comment
Note: The nature of the Internet makes it impractical for our staff to review every comment. Please note that those who post comments on this website may do so using a screen name, which may or may not reflect a website user's actual name. Readers should be careful not to assign comments to real people who may have names similar to screen names. Refrain from obscenity in your comments, and to keep discussions civil, don't say anything in a way your grandmother would be ashamed to read.
Respond to this story