Dickerson pleads not guilty, is out of jail on home detention

A 45-year-old Greencastle woman, charged with taking more than $80,000 in Madison Township Volunteer Fire Department funds for personal use, made her initial appearance in court Monday afternoon.

Tammy Dickerson, the former Madison Township VFD treasurer, appeared before Putnam Superior Court Judge Denny Bridges in a brief hearing in which he entered a not-guilty plea on her behalf. 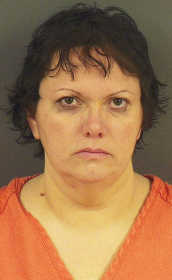 Judge Bridges read the four felony charges against Dickerson related to alleged thefts over the period 2014-16. She is charged with:

-- Theft, a Class D felony, punishable by 6 months to 3 years in prison.

-- Official misconduct, a Class D felony, punishable by 6 months to 3 years in prison.

-- Official misconduct, a Level 6 felony, punishable by 6 months to 2-1/2 years in prison.

Because some of the allegations date prior to July 1, 2014, the charges are actually filed under the state's old and new felony systems.

Bridges set bond at $20,000 cash (with 10 percent allowed) for Dickerson, who was arrested at her Avenue D residence at 7:25 p.m. Friday by Greencastle City Police Officer Darrel Bunten and spent the weekend in the Putnam County Jail.

Dickerson, however, asked to be considered for home detention since she is employed at one of Greencastle's East Side companies and doesn't want to lose her job while waiting out court proceedings.

The defendant was released from the jail Tuesday on home detention with a pretrial conference set for 9 a.m. May 10. A jury trial, should the case come to that, has been scheduled for Aug 8.

Working fulltime, Dickerson is ineligible for receiving court-appointed legal counsel and will hire her own attorney.

A subsequent investigation revealed that on several occasions during 2014-16, Dickerson, in her position as treasurer, allegedly utilized fire department funds estimated at $80,216.72 for personal use such as cash withdrawals, paying personal bills and purchases at local retail stores.

When fire officials reportedly asked Dickerson for the department checkbook, they discovered the check ledger had been torn out.

Informed that MTVFD money was missing, Dickerson reportedly told fire department officials "I intended on paying it back," the probable cause affidavit notes.

The case was investigated by Indiana State Police Det. Brian Maudlin, who in a key element in the case discovered six checks had been written to Duke Energy. The Madison Township firehouse is served by Parke County REMC, so there is no reason any checks should have been written to Duke.