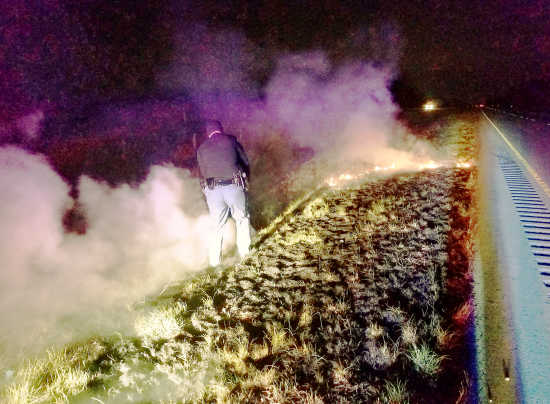 PUTNAMVILLE — Troopers from the Indiana State Police Post at Putnamville responded to a pair of recent fires.

At approximately 12:30 a.m. Monday, Troopers James Crisp and Kyle Hall responded to a grass fire in the median of eastbound Interstate 70 near the 48-mile marker in eastern Putnam County, seven miles east of Cloverdale.

The fire was approximately 25 feet in length, authorities said, and due to the quick response of the troopers utilizing their standard-issue fire extinguishers, the fire was completely extinguished. Responding fire units were given orders to disregard the call and return to station.

Troopers Crisp, Hall and Petrowski entered the residence to check for occupants, while Master Trooper Brown relayed emergency information to the ISP Region V Dispatch Center. No one was found inside the home.

Troopers then utilized their fire extinguishers to keep the fire from spreading to the house from the fully engulfed shed and subsequent grass fire.

There were no injuries during either event.