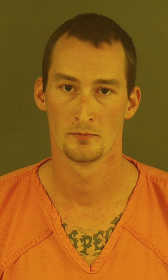 CLOVERDALE — A third man believed to be involved with the Dec. 7, 2016 robbery of Cloverdale Liquors is in police custody.

Dalton Perryman and Dennis Kent, Brown’s alleged cohorts in the crime, were arrested in the days after the incident. Both men remain lodged in the jail on $50,000 cash bond set by Superior Court Judge Denny Bridges.

Marshal Steve Hibler told the Banner Graphic that the Cloverdale Police Department had received information in recent days of where Brown had been staying.

With seven officers and a K9 unit on the scene, Brown surrendered without incident.

“The sheriff’s department and the PD, we’ve been working hard to clean up warrants,” Hibler said. “This one’s off the list.”

Along with Perryman, Brown is alleged to have robbed Cloverdale Liqors the evening of Dec. 7. Kent, who had been employed at the store, is the perceived “inside man.”

Perryman faces charges identical to those of Brown.