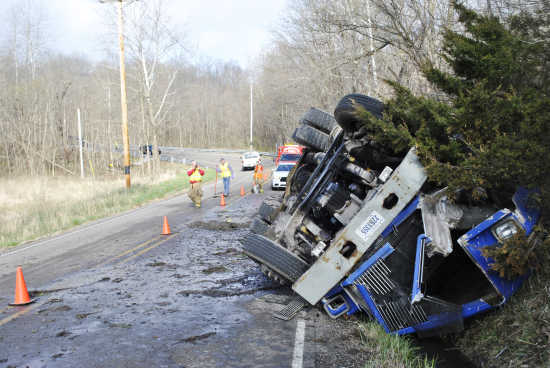 A tractor-trailer loaded with logs was damaged in a rollover accident Tuesday morning on State Road 236 in northeastern Parke County. Driver John P. Fagg, 46, Brazil, sustained only minior injuries in the mishap.

Preliminary investigation of the single-vehicle 9:30 a.m. accident revealed that John P. Fagg, 46, of Brazil, was driving a 1997 Volvo tractor, pulling a trailer loaded with logs eastbound on SR 236 near Guion.

He was driving for Clausen Trucking of Greencastle, State Police reported.

As Fagg was entering a right curve in the roadway, he apparently lost control of the rig, traveled off the north edge of the roadway, and rolled onto the tractor's driver's side.

Fagg sustained minor lacerations and bruises. He was treated at the scene by Marshall Fire/Rescue and Parke County EMS personnel and released.