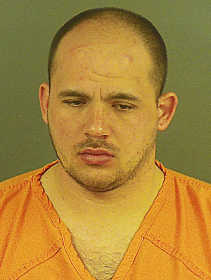 James Michael Mink, 28, was booked in the Putnam County Jail at 3:08 a.m. Friday on preliminary charges of driving while intoxicated and resisting law enforcement.

Around 11:15 p.m. Deputy Anthony Brown was patrolling County Road 900 East near U.S. 36 when Mink’s vehicle passed in the opposite direction.

Brown turned around to follow Mink and the suspect began fleeing at a high rate of speed.

Mink turned north toward New Maysville on County Road 725 East and led the deputies on a meandering, sometimes backtracking, course through parts of four townships, various county roads and even private property.

With the vehicles heading eastbound on County Road 900 North, a deer ran into the side of Brown’s Chevrolet Tahoe, damaging the driver’s side.

With Freeman now leading the pursuit, Mink missed the turn at 675 East and 1050 North, lost control and entered a yard.

The deputy initially pinned Mink’s car in, but the suspect then reportedly backed into the front bumper of Freeman’s Ford Explorer before getting back onto the road.

The suspect led the officers south before turning back east onto 800 North in the direction of Rolling Stone Covered Bridge.

After navigating the turns approaching the bridge as well as the bridge itself, Mink lost control in a curve and got stuck in a ditch.

The officers, including Mahoy’s K-9 partner Toby, converged on the vehicle. Although Mink initially would not come out of the car, Freeman and Cox were able to pull him from the vehicle and handcuff him.

While both were damaged, the deputies’ vehicles remained drivable after the chase.

Deputies plan to make contact with the residents whose yards may have been damaged by the end of the weekend. Anyone who believes their property may have suffered damage may contact the Putnam County Sheriff’s Office at 653-3211.