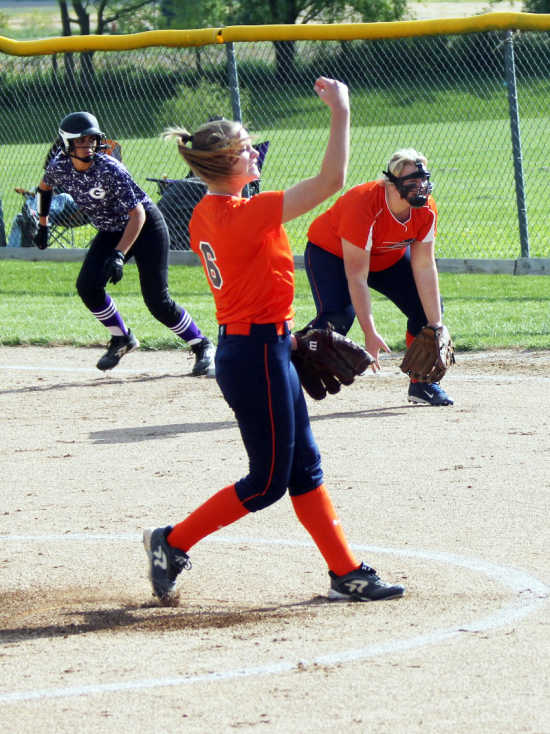 Cloverdale is the defending Putnam County champion in high school softball, and the Clovers have gotten off to a good start in this young season.

Greencastle has the most experience returning from the challengers trying to knock the Clovers off the county champion pedestal, while both North Putnam and South Putnam have young and talented rosters with bright futures.

Here is a look at each team:

The Clovers were 11-7 last year, losing to eventual sectional champion Cascade in a close game at South Vermillion.

Senior Lauren Meek returns as the team’s top pitcher, recording an 11-7 record last year with 66 strikeouts, 57 walks and a 4.78 ERA.

“Lauren has pitched nearly every inning the last three years, winning two county championships and the school’s only conference championship in 2015,” Cloverdale coach Jim Spencer said. “As in the past, we are counting on Lauren to throw a lot of quality innings for us this year.”

Spencer can also call on senior newcomer Baylee Hamilton and freshman Macie Couch on the mound.

“Both of these girls could help relieve some of the pitching load we have placed on Lauren the last three years,” Spencer said.

Leading the Clover returners at the plate is future DePauw Tiger Kelsey Helterbrand, a senior shortstop who hit .452 last year and is a three-year starter.

Helterbrand and Shedron were both all-county performers last year, while Meek was the county’s Pitcher of the Year.

Junior Dinah Bunch will be manning second base.

Hamilton and Couch are also available to play first base.

“We have an experienced defense and batting order,” Spencer said. “Every player returned this year with a better bat, better glove, and a lot of summer experience. We just need to make plays, cut down on mental mistakes in the field and at the plate, and just get better each day as the season progresses.

Spencer likes his team’s improved speed and depth as other positive qualities.

“We have not had those things in the past,” Spencer added. “We have several players that can contribute in different ways to make us a better team over the course of the season. Our depth will allow us to use different players in different situations and survive injuries a little better than in the past couple of seasons.

“We have managed to play our best softball in late May each of the last two years and that is the goal again this year.”

Senior Skyler Hensley is the top returning hitter for the Tiger Cubs, batting .426 last year. She will be splitting time between the mound and first base, coach Tabatha Briones said.

Senior Grace Paul will be making the transition this season from third base to catcher.

Both Hensley and Paul were all-county performers last year.

“Grace has been playing quite a bit in the off-season and became more dominant as a left-handed hitter,” Briones said.

Junior Julia Mundy, who bats and throws left-handed, will be splitting time between pitching and center field.

“She has put in time in the off season on strengthening her skills as a pitcher and dominant leadoff batter,” Briones said.

Sophomore Mckenzie Woodall suffered a season-ending injury at the start of last season, while freshman Macy Clark is also expected to see action in the infield.

“We are looking for Mckenzie to create a strong middle infield defensively,” Briones said. “It is always favorable to have incoming freshmen like Macy who have the skill set to play varsity. She has a strong bat and is a versatile player that while strengthening her pitching skills will split time between first and center.”

Briones is looking to her experienced players to provide leadership.

“We lost quite a few players during last year’s season and since the end of the season we lost three varsity starters,” she said. “We have two seniors that moved into the leadership role and have been sharing both fielding and batting experience to help better develop freshman and sophomores.”

Briones considers her pitching staff to be “strong” this season.

“We are fortunate to have more than one solid, versatile varsity pitcher,” she said. “Defensively I will be stronger in the middle infield, which is somewhere we struggled last year. Offensively, four of our top batters from last year are returning to the top of the lineup.”

Briones knows her team will improve as the younger players get better adapted to the varsity level.

“We are a young team,” she said. “Out of four underclass starters, three will be walking onto the varsity field for the first time. We have been working on communication, hitting and fielding skills, as well as team unity.”

Many of those athletes have already been successful in other varsity sports this season.

Gierke was the team’s starting pitcher in a loss to Covenant Christian earlier this week.

The Eagles graduated county Player of the Year Katie Hewitt as well as standout infielder Mackenzi Carrington, and have the youngest team in the county this season.

“With 12 freshmen and sophomores on our team, it was good to see our only two upperclassmen shake some of the rust off and get back into softball play again,” Eagle coach Jamie Steffy said after Tuesday’s doubleheader loss to Cloverdale. “Regan [Keller] is our only senior had to sit out last year as a transfer and Becca [Perry] missed a lot of last season with an injury. I know they missed playing softball a lot.”

Bratcher and classmate Grace Carr were both all-county selections last year. Carr batted .404 and was the team’s top pitcher with a 6-4 record.

The Eagles scored 14 runs in Tuesday’s doubleheader, but the hard-hitting Clovers pushed 35 runs across the plate to pick up the sweep. Steffy was pleased that his team had only four strikeouts in 57 plate appearances.

“We have a good team that is really, really young,” he said. “We were disappointed obviously in the two losses, but we aren’t disappointed in what we have, the improvement we are making and where our program is going.”