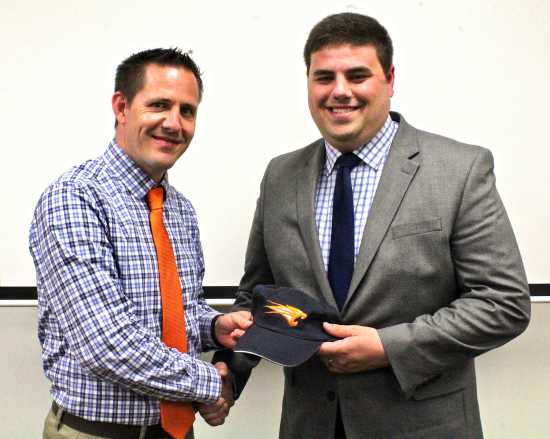 BAINBRIDGE — After filling the vacant position of athletic director in March, the North Putnam school board announced during a public session Thursday its decision to hire Sam Carnes as the newest head football coach of the Orange and Blue, filling its only remaining vacant position in the process.

Carnes, who most recently coached football in in the positions of junior-varsity head coach and special teams coach for the varsity squad at Avon High School, accepted his first head coaching position Thursday after the board approved his hiring via 6-0 vote.

Asked how it feels to be the new head coach of North Putnam’s football program, Carnes said he feels perfectly at home with the small-town experience common to northern Putnam County.

“Before (coaching) I played football at Taylor University and it’s great to be back in a small town like where I went to school,” Carnes said. “There are definitely some things about a small town that I miss from college that I’m looking forward to here.

“I think coach (Greg) Barrett has done a great job here — he’s definitely laid out a foundation for success and we’re looking to continue to build off of that,” Carnes continued. “Our big thing is going to be about doing the small things the right way while building character and building a good culture where people talk about hard work and loving each other and carrying that over being great football players.”

Carnes’ wife, Caitlin Carnes, was also present for his approval Thursday. The pair shared that they are expecting a bundle of joy to be making his or her appearance in October.

“She’s been very supportive of me and is excited to begin building relationships,” he said, playfully adding “and hopefully we won’t have our baby on a Friday.”

Board member Ron Spencer, who also took part in the selection process for Athletic Director Roger Busch’s recent hiring, said Carnes was the tip of the iceberg in a pool of excellent candidates.

“I look forward to having (Carnes) not only on board as a football coach, but as a teacher as well,” Spencer said. “There were some late nights, a lot of discussion and I feel like there was a lot of open communication within the community.”