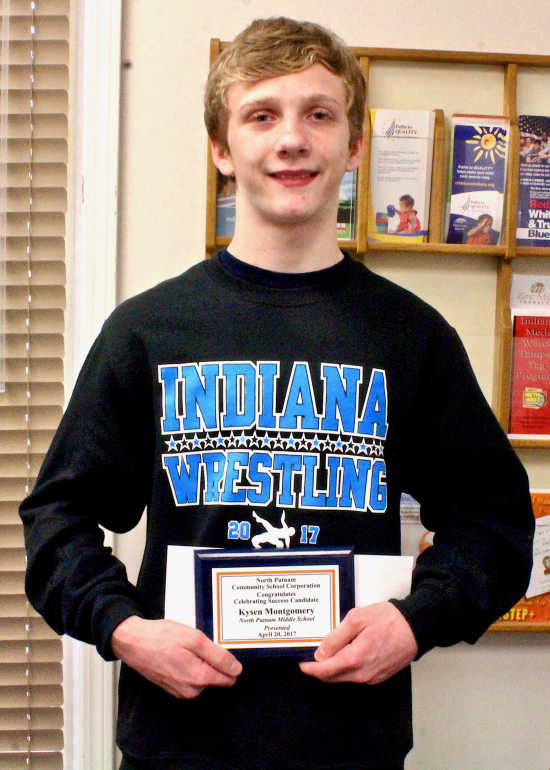 Kysen Montgomery was honored at Thursday’s North Putnam school board meeting for both his academic and athletic successes.
Banner Graphic/Nick Wilson

BAINBRIDGE — During its monthly public session Thursday, the North Putnam school board formally recognized an up-and-coming middle school student for his impressive record on the wrestling mats.

Kysen Montgomery, 13, was present for the Celebrate Success portion of the meeting, which regularly acknowledges the efforts of Cougars both future and present.

Bucky Kramer, a wrestling coach and current middle-school athletic director, introduced Montgomery — who was accompanied by parents Darren and Tisha.

“Over the course of the last four years (Montgomery) has gone 103-1 at the middle-school level for North Putnam,” Kramer said. “This past weekend he wrestled for Team Indiana, went 7-1 and helped our state team finish as one of the top in the nation.”

To add to his success with Team Indiana, Montgomery has within the last year finished as the national runner-up at the USA Wrestling Tournament, was the ISWA state runner-up and the New Wave National Champion.

“Those, in themselves, are awesome,” Kramer said. “As much work as he puts in on the wrestling mat, he also puts as much time in the classroom. He’s a straight-A student, he’s a good kid and we’re very proud of him.”

Asked how it feels to be center stage of the underclassman wrestling scene, Montgomery said he sees the benefit to so much hard work.

“I feel pretty good — I feel like I’ve been working hard and getting better, but there’s always room for improvement,” he said.

Montgomery looks to continue his imposing record as enters higher levels of the wrestling landscape at North Putnam and the state. 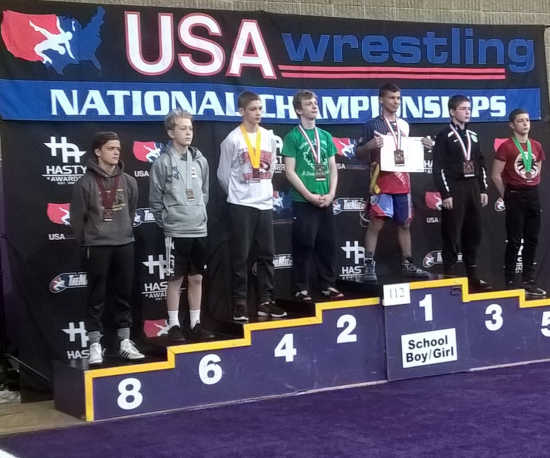 North Putnam eighth-grader Kysen Montgomery (on second place medal stand) is honored at the USA Wrestling national championships. Montgomery competed in the tourney at the UNI Dome on the campus of University of Northern Iowa at Cedar Falls, Iowa.
Contributed photo
Respond to this story