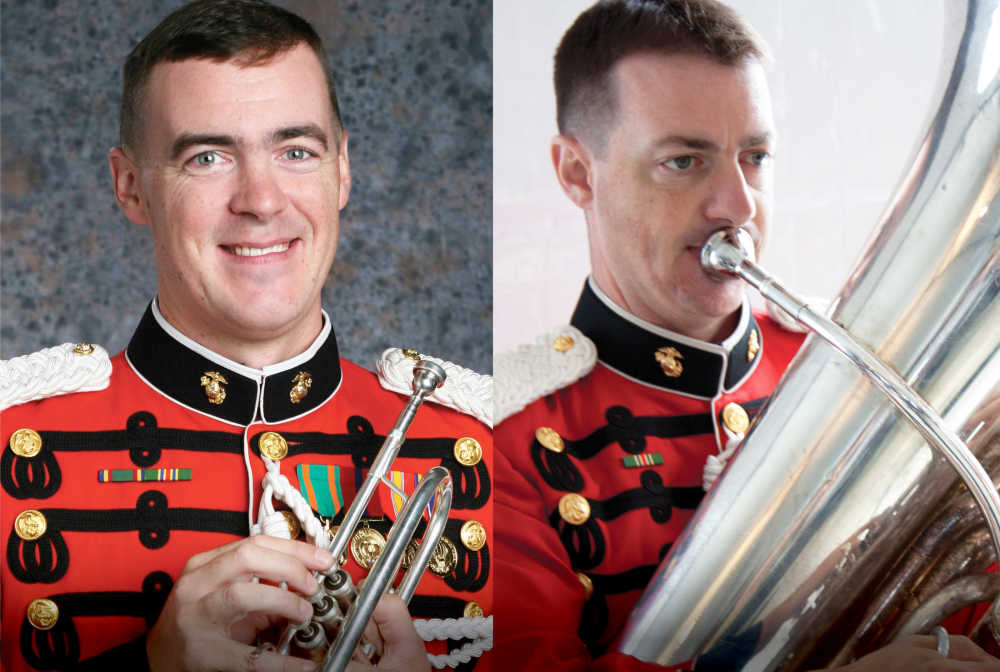 Courtesy photos Ending the year with a premiere, the DePauw University Band will present two distinguished soloists — Master Sgt. Michael Mergen and Paul Mergen, current and former members of the United States Marine Corps, “The President’s Own” — in a performance of “Hanging by a Thread,” their commissioned work for trumpet, tuba and wind ensemble by James Stephenson at 3 p.m. Sunday in Kresge Auditorium.

For its final concert of the season, Sunday, April 30 at 3 p.m. in Kresge Auditorium, the DePauw University Band will present two distinguished soloists -- Master Sgt. Michael Mergen (United States Marine Corps, "The President's Own") and Paul Mergen, tuba (formerly, United States Marine Corps, "The President's Own") -- in the premiere of their commissioned work for trumpet, tuba and wind ensemble: "Hanging by a Thread" by American composer James M. Stephenson.

The program will also include a tribute to Donald H. White, former chairman of the DePauw School of Music theory and composition faculty, featuring his "Miniature Set for Band"; the magnificent "United Artists" fanfare by Kenneth Fuchs; "O Magnum Mysterium" by Morten Lauridsen; "Dance of the New World" by Dana Wilson; the first movement of Igor Stravinsky's classic Octet for chamber winds; and the Finale to Symphony No. 3 "Organ Symphony" by Camille Saint-Sa'ns.

Sunday's trumpet soloist Master Sgt. Michael Mergen of Lebanon Township, N.J., who joined "The President's Own" in May 1999, performs with the Marine Band and Marine Chamber Orchestra at the White House, in the Washington, D.C. area, and across the country during the band's annual concert tour.

Brother Paul, a member of United States Marine Band from 2004 to 2015, became the tuba instructor at Indiana State University and a member of the ISU faculty brass quintet in January this year. He has also performed with orchestras, including the Seattle Symphony, Washington National Opera, Baltimore Symphony, Indianapolis Symphony, Fort Wayne Philharmonic, Harrisburg Symphony, and Lafayette Symphony.

The Marine Band is America's oldest continuously active professional musical organization. Founded in 1798, the band has performed for every U.S. president since John Adams. Known as "The President's Own" since the days of Thomas Jefferson, the Marine Band's mission is to provide music for the president of the United States and the commandant of the Marine Corps.

For Sunday's band concert, audience members are encouraged to bring a non-perishable food item, which will be donated directly to the Putnam County Emergency Food Pantry. Bring an item and redeem it at the Green Center box office for free admission to the performance.

Advance tickets, which are $5, may also be obtained online at www.music.depauw.edu and in person at the venue beginning one hour prior to the concert. Tickets for seniors, youth and all students are free.