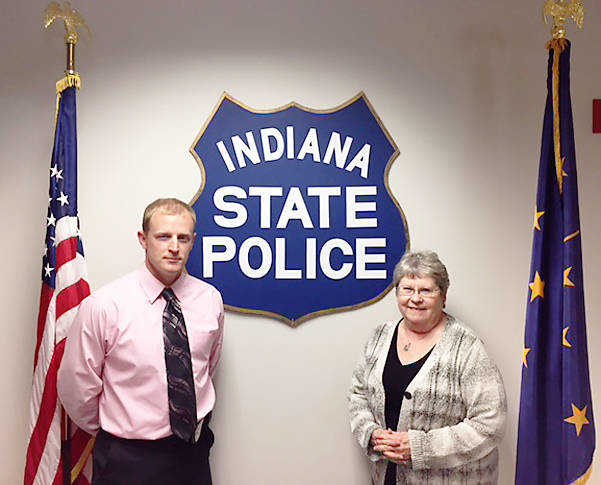 PUTNAMVILLE — During a district post meeting, two Putnamville District employees were recently recognized for years of service to the department.

Det. Michael Featherling was recognized for five years of service to the department.

Featherling graduated from the 71st ISP Recruit School in 2012 and was assigned to the Putnamville Post. While serving as a road trooper, Det. Featherling served on the Tactical Intervention Platoon, obtained his Federal Methamphetamine Clandestine Lab Certification and served periodically on the Putnamville Meth Suppression Team.

Prior to graduation from the ISP Recruit Academy, Featherling served three years with the Indiana Capitol Police. Featherling is a graduate of Sullivan (Ill.) High School and later attended Lakeland College and the University of Indianapolis. He is also a 2 ˝ -year member of the Indiana Air National Guard 181st Wing at Hulman Field.

In his off time, Featherling serves as the Riverton Parke High School freshman boys’ basketball coach and as RPHS varsity cross country coach. Married with two children, he and his family reside in Parke County.

Secretary IV Rebecca A. “Becky” Roach was recognized for 20 years of service to the department.

Roach was hired Aug. 26, 1996 as a dispatcher for the Putnamville District. In 2009, the Indiana State Police initiated a regional dispatch system and Becky was transferred to the Region III Dispatch Center in Bloomington. She performed daily communication duties at RDC III until she interviewed and accepted a position as secretary IV back at the Putnamville Post on Aug. 2, 2015.

A Putnam County native, she graduated in the second class of the then-newly constructed South Putnam High School. She is a fifth-generation owner of her family farm and a 2016 recipient of the Hoosier Homestead Award.

Roach is also a volunteer quilter for the national organization Quilts of Valor and has completed more than 36 quilts since January 2016.

Any remaining spare time between farming, working for the ISP and quilting, she is a master gardener. Married, she is the mother of three grown sons.