In a year without even so much as a primary election on the political calendar, no lack of issues could keep an outspoken Indianapolis commentator from entertaining a Putnam County Republican Lincoln Day dinner crowd Sunday afternoon.

“We are a year and two days from the May (2018) primary,” Abdul-Hakim Shabazz, a man of wit and wisdom forged daily on WIBC radio in Indianapolis, told local Republicans during a brunch setting at the Inn at DePauw. “Yea, I see you’re all so excited,” the part-time stand-up comic added. 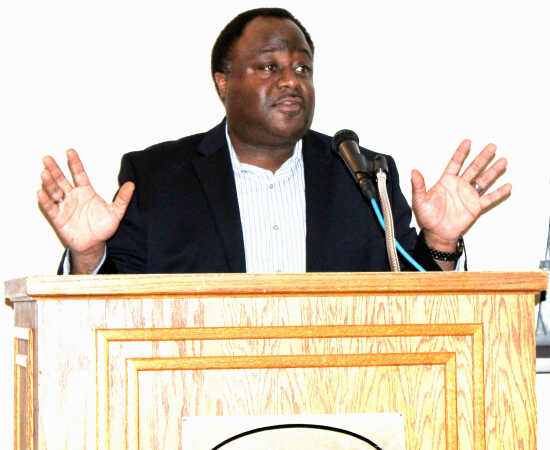 Shabazz noted that he was recently lamenting to District 44 State Rep. Jim Baird (R-Greencastle) that Indiana legislators hadn’t provided much fodder for his political cannons this year.

“These guys were giving me nothing to write about,” Shabazz said. “I got nothing. Then along came (the issue of) cold beer at a gas station and I thought, ‘There is a God and he loves me.’”

Indiana is “basically a place that has its act together,” Shabazz pointed out, especially in comparison with his home state of Illinois. “Does it (Indiana) have its problems? Sure.”

He pointed out the recent craziness that ensued when Marsh Supermarkets decided to do away with pharmacy operations at its remaining stores. It turns out that the only way state law allows a grocery store to sell alcohol is that it maintains a pharmacy operation as well.

With Marsh quitting the pharmacy business, that prompted “a fire sale (of its alcohol inventory) ... or a firewater sale as I like to call it,” Shabazz said of a run on bargain booze. “People were literally knocking each other over for Night Train and Boone’s Farm Strawberry Wine.”

Eventually, the speaker reasoned, Indiana lawmakers are going to have to come to grips with outdated alcohol laws and rewrite them, especially in regard to Sunday sales and cold beer at grocery stores.

The political commentator, a frequent contributor to WRTV, Channel 6, Indianapolis, who also authors a blog, said the bill to raise the state gasoline tax by 10 cents has raised blood pressures and some interesting issues.

Hoosiers are angry that taxes were raised 10 cents -- or the equivalent of a $1.20 for a round trip to Chicago, Shabazz said from personal experience -- to fund a program of state road repairs.

Many argued that Indiana should have emptied its bank account of a $2 billion surplus first.

Carol Sweet, who had served as Republican Central Committee secretary the past 27 years, is honored Sunday during the party's Lincoln Day Dinner as GOP Treasurer Justin Long presents her award. Sweet later won a drawing to take home the life-size cardboard cut-out of President Donald Trump standing behind her. Banner Graphic/ERIC BERNSEE

“That would last two years,” Shabazz said, “then what?

“If anybody tells you we could have done it (fixed the roads) without raising taxes, they’re either lying to you or they think you’re stupid,” he said. “I’ve done the math on this over and over, and I do this for a living.”

When election time does roll around again, Shabazz said “it’s going to be interesting to see who won’t be running for U.S. Senate a year from now.”

That’s because he expects a bevy of candidates to fight it out in both primaries. He named Republicans like District 4 Congressman Todd Rokita, District 6 Congressman Luke Messer, Indiana businessman Terry Henderson and others as eyeballing the GOP nomination.

The speaker even took a little swipe at President Donald Trump before he was done, suggesting that the recent celebration of House passage of the health care bill might have been a little early.

“A Rose Garden ceremony for something that is going to be gutted and changed is a bit premature,” he reasoned.

“If you start acting like you’re going to win, you’ll lose and things will go away,” Shabazz cautioned. “Ask Hillary Clinton.”