Whether they were tales from the quiet of the Western Front, the shores of Tripoli or the bloody beaches of Normandy, telling war stories has helped preserve memories of combat and camaraderie, all the while creating some of the most interesting intergenerational conversation around.

And Saturday at a special veterans' open house at the Putnam County Museum in Greencastle, the dialogue was no different.

Nearly 60 persons were on hand for the open house and a chance to view the new museum exhibit, "A Salute to Veterans," made possible through personal artifacts shared by more than 20 local veterans and their families. 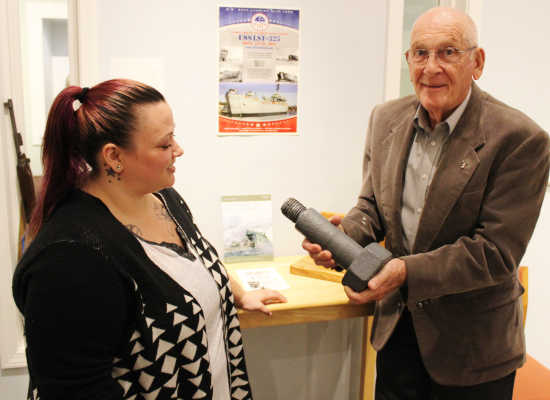 A relic of the D-Day invasion -- a bolt from a cargo bay door of the LST-325 ship that landed at Normandy -- is shared Saturday by Clyde Stringer as he shows it to Megan Rentfro of the Putnam County Museum staff. Banner Graphic/ERIC BERNSEE

Chatting with Vietnam veteran Joe Walden, former Korean War-era Army Pfc. Donald Flint talked about witnessing firsthand the detonation of an atomic bomb in the desert of Nevada, while 91-year-old William Jackson spoke about flying bombing raids over Italy and turning his World War II duty into a love of acrobatic flying.

And Clyde Stringer shared a piece of history (a heavy hunk actually) -- a real D-Day relic he saved from the scrap heap.

Flint, the 85-year-old Greencastle man known for legendary local blood donations -- more than 100 pints before stopping due to a health issue -- witnessed an A-bomb test from just six miles away in 1953 at Desert Rock, Nev.

Flint shared his observations in a letter to his mother that was published in the Daily Banner on May 13, 1953. A copy of that printed letter is part of the museum exhibit.

"I'm sorry I haven't written sooner," Flint's letter begins, "but if you had seen what I have gone through the last week you would understand why you haven't heard from me.

"I saw the atomic bomb and I hope I never see it again unless it is under the same conditions."

Flint noted that the 1953 test was the first of its kind.

"So to not take any chances we were about six miles from where it went off," he wrote, adding that the men were in trenches when it was detonated and not looking directly at the blast, which he described as "about 50 times as bright as the sun."

"At six miles, you wouldn't think there would be much to it," Flint said, "but there was. If we hadn't been in the trenches it could have knocked us down."

And when it was all over, the troops -- oblivious to the dangers of radiation -- walked to ground zero to observe the damage, Flint noted.

Talk about your conversation starters ...

Stringer's story was a little tamer. The 87-year-old Belle Union man is a retired farrier, having shod horses for decades before retiring 17 years ago.

Looking for something to do in his newly found spare time, Stringer came across an item on the Internet looking for volunteers to help restore a U.S. Navy LST (or Landing Ship Tank).

The USS LST-325 to be exact, one of 1,051 such ships built but the only one still sailing. That's quite an accomplishment since it was part of the D-Day invasion at Normandy and even survived after being stuck on the beach that night due to low tide. 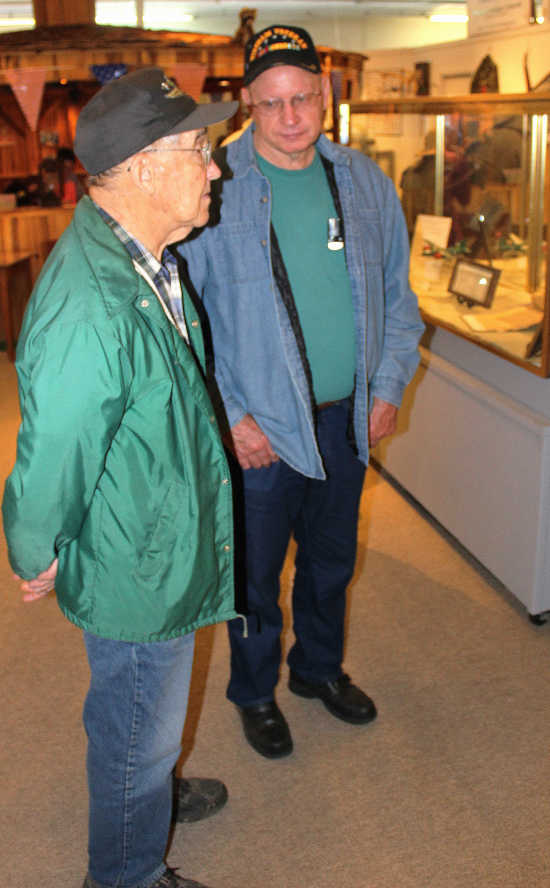 Homeported at the Aurora Ferry Landing near Evansville, the LST-325 sailed down to Port Arthur, Texas, for restoration work with Stringer along as part of the crew. As old bolts were replaced on cargo bay doors, the heavy old bolts (weighing about 20 pounds each) were knocked out by hammers and tossed into the scrap metal pile -- at least until Stringer took notice.

"I asked the captain if I could have one," Stringer recalled, "and he said, 'Yes, if you go down and get the rest of them.'"

There were 14 such bolts in all and Stringer rescued them all from the scrap heap as artifacts of D-Day.

Some of his co-workers initially thought he was "crazy for keeping the bolt," Stringer said, until they found out they were real D-Day relics.

Asked if he was donating his bolt, which he restored by sandblasting and repainting, to the museum, Stringer smiled. "I'm keeping it," he said, "it's mine."

Stringer, who was only 15 when World War II ended, also displayed a 1943 M-1 carbine Saturday that he said had been built by IBM. Because of that IBM connection he bought the rifle -- never even issued to a soldier during the war -- from a gun dealer. The ammunition is still wrapped up and the bayonet never sharpened but it remains a conversation piece nonetheless.

The 328-foot-long LST-325 gets taken out for a cruise once a year, Stringer said, adding that he must have done a good job as a volunteer since they keep inviting him back and have made him a member of the crew.

But he cringed a little telling the story how one time on its return voyage to Evansville, the ship ran aground near Nashville, Tenn.

"I was on duty at the time," Stringer said at just above a whisper.

No problem though. Consider it just another war story ...