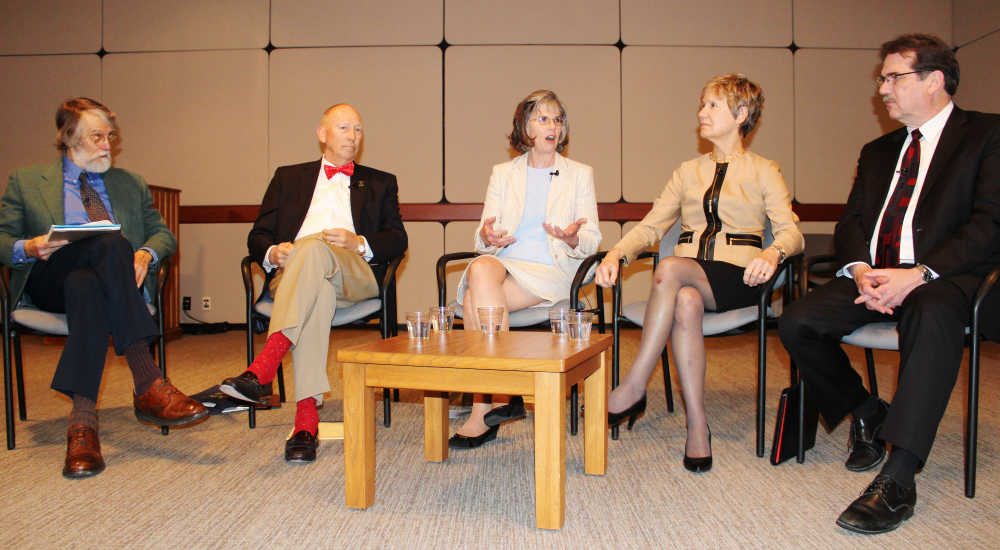 With DePauw University political science professor Bruce Stinebrickner (left) listening intently former three-term Greencastle Mayor Nancy Michael (center) tackles a topic during a program featuring the last four mayors of the city. Also on the panel are Mike Harmless (second from left), Sue Murray and Bill Dory. All four mayors are Democrats, meaning the city has been led by a Democratic administration for 30 years within a county in which every single county elected official is a Republican.
Banner Graphic/ERIC BERNSEE

Being the mayor of Greencastle is a 24/7 proposition ... an honor and a privilege ... a blessing and a curse.

They were the recent guests of DePauw University political science professor Bruce Stinebrickner for a two-hour journey down Greencastle’s memory lane before about 60 audience members at Watson Forum of the DePauw Center for Contemporary Media.

After asking the foursome how they came to run for the city’s highest office, it was Stinebrickner who summarized the common thread running through their answers.

“I don’t think I realized how much you were all connected,” he said of the transfer of local power that has occurred over the last 30 years.

Both Harmless and Michael referred to it as “a calling.”

“IBM was closing,” Harmless said when he made his decision to run for mayor. “It was a calling. I felt the community had done very well for my family. But I remember very distinctly my dad telling me, ‘You must be losing your mind.’”

Michael, the city’s only three-term mayor ever, recalled how “good friend and neighbor” Harmless told her she needed to run for mayor when he retired after two terms. Her response? “You’re crazy, I‘m not.”

Then one day she said to herself, “Why not?” Noting her duty to serve, she said her legs turned to jello as she pondered the idea before saying, “This really is my calling.”

Harmless, meanwhile, called his administration “transformative,” noting that overall eight new industries came to Greencastle in the aftermath of the IBM departure and city government needed to react to many of their needs in order to fulfill the employment promises that accompanied them.

“During my eight years we had to transform city government from a part-time administration into fulltime,” he said. “And we had to do that quickly.”

Michael said what Harmless passed on to her was a stable economic community.

“My job,” she said, “was all about infrastructure.”

Greencastle built a new water plant on her watch and got off an Indiana Department of Environmental Management sewer ban that wasn’t going to allow any new sewer hook-ups -- be it single-family homes or mega-job industries -- until the sanitary sewers and their bypassing into Big Walnut Creek were rectified.

Her administration also moved City Hall from a “place over the police and fire station where their kept hay” for the horses that pulled the old fire wagon. “It was not a place where you wanted to meet your good industrial prospects,” Michael smiled.

That’s not to mention expanding the airport, moving the police station and initiating a recycling program that wasn’t exactly met with open arms when it started.

“It was all about the infrastructure to support a community that was growing,” she said.

And after three terms and 12 years, Michael turned to Murray and said, “OK, Sue ...”

“Good luck,” Murray said, finishing the thought before Michael could complete the sentence.

“We were extraordinarily fortunate over my eight years,” Murray said, noting that 15 economic development projects were undertaken representing $200 million in investments and “people stayed working.”

Then in 2011, Greencastle was named one of Indiana’s first two Stellar Communities (North Vernon was the other) and was promised more than $19 million for a series of improvement projects, not the least of which was upgrading the facades around the square.

While the city eventually ended up actually getting about $10.1 million after the parking garage and downtown loft apartment projects fell through, the public was energized and people were excited, Murray said.

With Starbucks and Eli’s Bookstore and Music on the Square all opening downtown while other communities weren’t doing so well, Murray said, in Greencastle “doing something was infectious.”

Dory followed Murray to the mayor’s chair, noting that he came to Greencastle in 1983 when Gerald Warren was mayor in a Republican administration.

“From that time forward,” Dory said, “Greencastle has benefited from good leadership.”

Recalling that the early days of his administration was like “drinking from a fire hose,” Harmless gestured toward the others who followed him in office and said, “One thing I see here is continuity.”

It’s not unusual in other communities, he noted, for a new mayor to kick out all the old department heads and appoint his or her cronies.

“You’re never going to get ahead by not working together,” Harmless stressed.

But being mayor of Greencastle can be tough when people call you at all hours or stop you in the grocery store or in mid-bite while you’re out to dinner.

“I think people were amazingly respectful,” Murray said. “I don’t want it to get lost along the way that we all did this because of our love for this community. A little inconvenience is not going to change that.”

“Our phone numbers were all in the book,” he said, recalling how he had a young man show up at his front door wanting to apply for a job at the park and once took an obscene call where he recognized the caller’s voice and asked him to come to City Hall in the morning.

“Going out to eat when you’re the mayor, that is hard,” he added. “It’s different in a small town.”

“Grocery stores are worse,” Murray interjected, speaking from the experience of carrying on multiple conversations between the produce section and the dairy case.

“Grocery stores are notorious,” Michael agreed. “My kids started not wanting to go with me. But people feel comfortable that they can talk to you when they see you on the street.”

Dory had a streetwise story, too.

After noting that he appreciates when people call because many times they alert city officials to a problem, Dory recalled a recent situation when he learned of a large chuckhole on U.S. 231 (Washington Street) in front of Starbucks.

Because of the hole, two people apparently fell crossing the street, but since it was Sunday, no one was avialable from INDOT to remedy the problem.

So the mayor himself grabbed a can of orange spray paint and encircled the danger zone in neon to alert pedestrians and drivers.

“Literally before 10 o’clock Monday morning, INDOT was there fixing it,” Dory noted.

But the mayors all agreed it’s far from a one-man or one-woman show at City Hall.

“You’re only seeing four of us up here today,” Dory pointed out, “but Greencastle has nine elected positions and three or four times that many on boards and commissions plus 80 fulltime employees.

“We’ve all benefited from having great people,” the mayor concluded.