Called "the model DePauw graduate" Sunday by University President Mark McCoy, 1983 DPU alumnus Jim Alling sent 561 university graduates out into the world with a taste of his business philosophy.

Current CEO of TOMS, Alling has also served as president of Starbucks USA and Starbucks International and as chief operating officer of T-Mobile USA. He drew on his varied experiences to address a commencement day audience at what became a sun-drenched Holton Memorial Quadrangle despite a threat of rain early on. 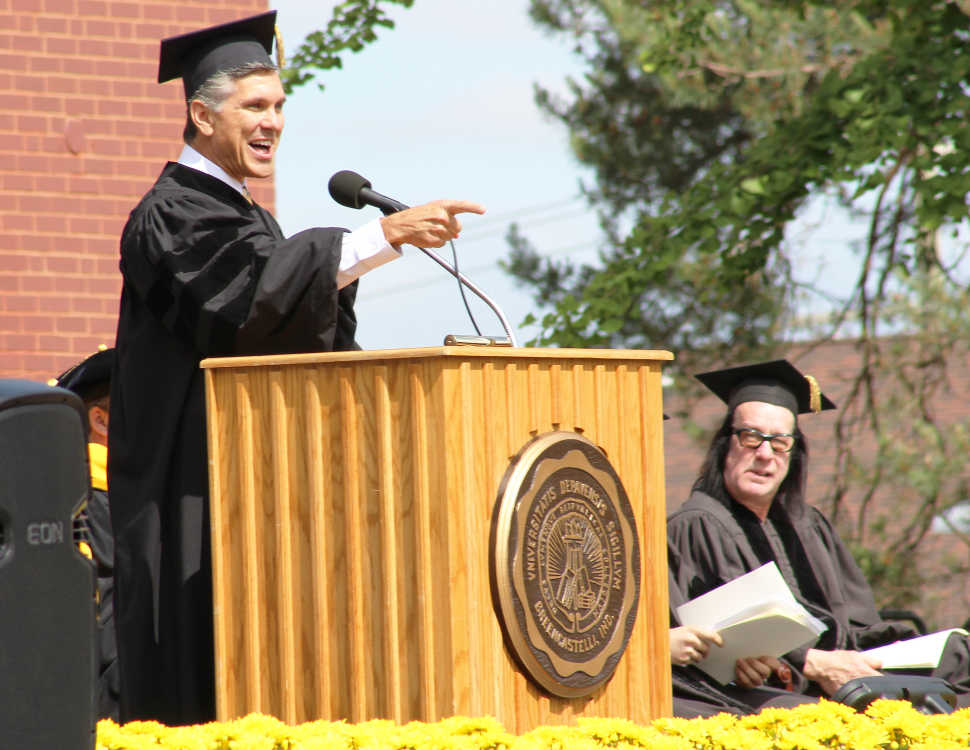 "You are more prepared for the real world than you think," Alling assured the Class of 2017 at his alma mater. "Your time here at DePauw has taught you things you will carry with you the rest of your journey."

Chief among them, he said, is a DePauw-learned ability to focus on not necessarily the right answers, but "how to ask the right questions."

DePauw taught him to be a critical thinker, Alling said, and it also has conveyed that message to the Class of 2017.

"Now you need to use those critical thinking skills," he said, "and commit yourself to always ask the right questions of yourself, of others, and of the situation."

Alling, who was a double-major in communication and Spanish, added, that "those critical thinking skills along with the lifelong friendships built at DePauw are the most valuable things I took with me when I drove away from Greencastle 34 years ago."

He suggested the class departing campus on Sunday should strive to leave the world better than they found it, calling it "the George Bailey effect" in reference to the Jimmy Stewart role in the movie "It's a Wonderful Life" in which an angel shows Bailey how the world would have been without him.

That theory came to mind, Alling noted, when Starbucks put him in charge of all of its retail stores -- a number that reached 10,000 by the time he was Starbucks president. He said he quickly learned from his mentor, Starbucks Executive Chairman Howard Schultz, that he should be asking the questions: "If not me, who?" And "if not now, when?"

So Alling tackled Starbucks store issues head-on at the local level, leaving his imprint on things like changing household-like toilets to more industrial-grade units, returning front pockets to barista aprons after they had been eliminated by the fear the pockets would facilitate stealing cash from the register, and his keen attention to picking up trash to assure the appearance of the stores and the properties.

"Toilets and pockets and picking up trash," he joked, "that's my legacy." 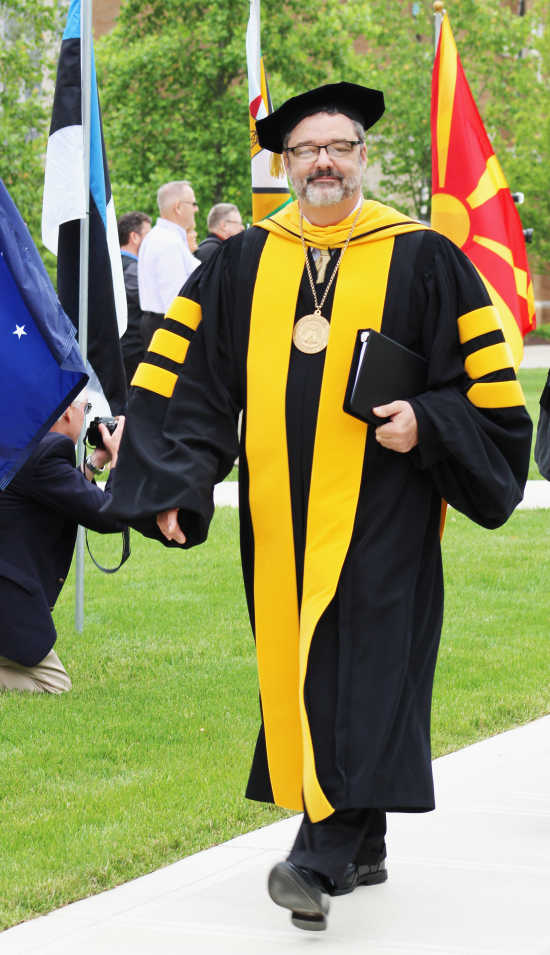 DePauw President Mark McCoy leads the processional through East College for the 178th commencement exercises at the university, ushering in his first graduating class as president. Banner Graphic/ERIC BERNSEE

Now at TOMS, Alling deals with a business model designed to advance health, education and economic opportunity for people worldwide. Each time the company sells a pair of shoes, a new pair of shoes is given to an impoverished child. TOMS has now given shoes to more than 70 million children worldwide, he said.

With each purchase of TOMS Roasting Co. coffee, the firm works with other organizations referred to as "giving partners" to provide 140 liters of safe water (a one-week supply) to a person in need. It also sells eyewear, and takes part of the profit from each sale to save or restore the eyesight for people in developing countries. Purchases of TOMS bags help provide training for skilled birth attendants and distribute birth kits with items to help a woman safely deliver her baby.

"Being of service feels good," Alling stressed. "In fact I have come to realize that being of service to others is one of the most self-serving things you can do."

Alling concluded his remarks by suggesting a final homework assignment for the DPU graduates.

"I hope you will take a moment today -- the day in which you are the center of attention -- to properly thank the people in your life whose love and support have helped make this day possible, and to also thank them in advance for their continued love and support as you begin this next leg of your journey."

Rundgren -- a veteran musician and innovator known for hits such as "Hello, It's Me" and "Bang the Drum All Day" and for producing Meatloaf's "Bat Out of Hell" and XTC's "Skylarking" -- was awarded an honorary Doctor of Performing Arts degree.

As Rundgren was presented with the honor, the student band played his "All the Children Sing" in an arrangement created by an undergraduate and Rundgren fan. The musical surprise created some confusion on stage, causing Rundgren to go return to his seat near the podium, and as a result, he did not speak.

Student speaker Sarah Emily Fears of Terre Haute certainly did, starting the commencement oratory parade with one of the lengthier Walker Cup (presented to the senior who has contributed the most to the university community during his or her four years on campus) speeches in recent memory. 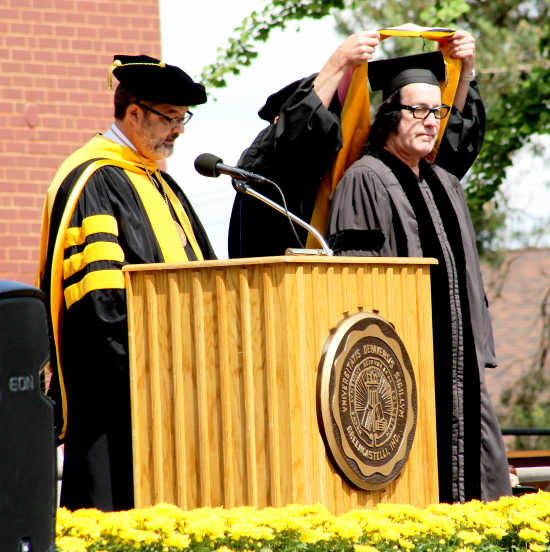 "DePauw's Class of 2017 is a force to be reckoned with," Fears praised. "The world outside of DePauw is not ready for the brilliant light our class is going to provide. They cannot render us invisible."

In her remarks, Fears cited the 1952 classic novel, "Invisible Man" by Ralph Ellison as she instructed her classmates to embrace their individual talents.

"You are more than what other people think of you," Fears stressed. "Live your life for yourself, and do what makes you genuinely happy."

A political science and Africana studies double major, Fears established the Intercultural Conversation Facilitator program in DePauw's Office of Multicultural Student Services. She served the Greencastle community as a Bonner Scholar, teaching English as a Second Language at Tzouanakis Intermediate School while also serving as a coordinator for the school's Student Friend program, a mentoring effort for third- through fifth-graders.

"We are a culmination -- the total sum -- of our experiences," Fears concluded, "and if our life stories are just what we thought others expected of us, then our stories will never be what they are truly meant to be. Do not let anyone else write or control your story. No one else can tell you who are. No one else can assign a value to you -- you are priceless."