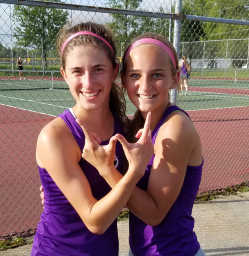 The Cubs will play in the Kokomo regional on June 3 against the survivor from Carroll (Fort Wayne).

Winners from Marion and Kokomo play in the other semifinal, with the winner advancing to the state.

Trout (a senior) and Newgent (a junior) were both named to the all-Western Indiana Conference team along with senior Madison Trout, and are believed to be the first girls’ tennis players to advance this far in the tournament.