Vittetow fulfills dream of a lifetime 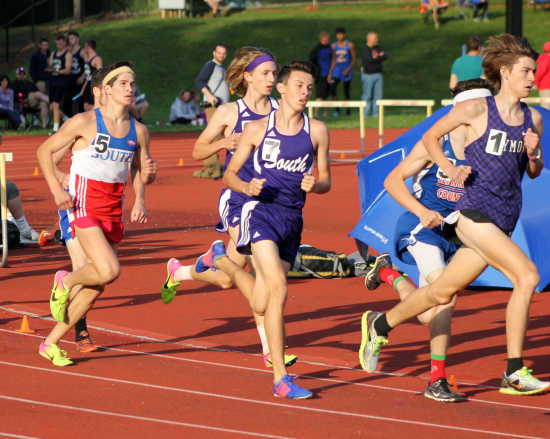 South Putnam’s Kieffer Vittetow (5) paces himself early in the 1,600-meter run at the Bloomington North Regional on Thursday. Vittetow came on strong at the end and finished second to qualify for next month’s state finals.
Banner Graphic/JOEY BENNETT
Order this photo

BLOOMINGTON — A journalist was the first person to say the phrase to the young man: “State finalist Kieffer Vittetow.”

The South Putnam senior was asked how those words sounded.

“Pretty good,” Vittetow said Thursday evening, after finishing second in the 1,600-meter run by just .34 of a second behind Bloomington South’s Jack Gillard and fulfilling a lifetime dream of qualifying for the state finals.

Countless mornings getting up early to run, regardless of the weather; miles and miles of training consuming countless hours of his life.

Thursday was payday for Kieffer Vittetow.

“It’s worth everything,” he said. “I’ve been dreaming about this my whole life. I think running has made my life, and made me who I am today.

“I am always wanting more, no matter what.”

Vittetow entered the regional with the fourth best time among the qualifiers from four area sectionals, but just fractions of a second separated the runners at the top of the heap.

Vittetow did not bolt out early, but ran with the pack for the first two laps before making his move at the halfway mark.

“I’m usually a sit-and-kick type of runner,” he said. “I was pacing it pretty well, but I was most worried about that last 400. I felt it in my legs, and I could have gone a little bit harder in that last 100 meters.” 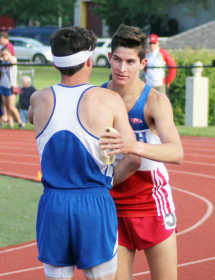 Kieffer Vittetow of South Putnam (right) congratulates one of his competitors after the 1,600-meter run Thursday.
Banner Graphic/JOEY BENNETT
Order this photo

The University of Indianapolis-bound Vittetow was satisfied with his 4:26 time, but has one big goal still in mind besides placing in the state meet.

Even though he hadn’t had much time to absorb the magnitude of his accomplishment, Vittetow knows it means a great deal to a lot of people.

“I love representing my school like this,” he said. “Showing that it doesn’t matter where you come from. If you put in the work, your time will come.”

Vittetow noted he is proud to be one of two state finalists from his school this year in track and field.

“Aubrey Barker won the long jump on Tuesday, and for us to have two athletes that’s extraordinarily good,” he said. “I’m extremely proud to be a South Putnam Eagle.”

Vittetow and his classmates will graduate on Saturday, but May 25 will always hold a special place in his heart.

“I was hoping to win, but my goal for my whole life has been to qualify for the state,” he said. “This day means everything to me. I’m looking to blow out that record at the state meet.

Several other Putnam County athletes competed well but fell just shy of being able to join Vittetow as state qualifiers.

Greencastle high jumper J.T. Matthews placed fifth at 6-3, as Brandon Eberle of Eastern Pekin had an outstanding leap of 6-9 to win the title.

Cloverdale’s Tyler Kaeff finished seventh in the 110 high hurdles and ninth in the 300 low hurdles. Greencastle’s Clayton Wilson was ninth in the 3,200.

South Putnam placed eighth in the 4x800 relay to score a point for its team, while North Putnam’s 4x100 relay team also finished eighth to earn a point in the team standings.

Cloverdale pole vaulters Blake Willis and Jordan Berardi finished as part of a three-way tie for seventh, while Elijah Williams of Greencastle was ninth in the shot put.

North Putnam competed in the 4x800 relay and finished 15th, while Cloverdale was 16th in the 4x400 relay.