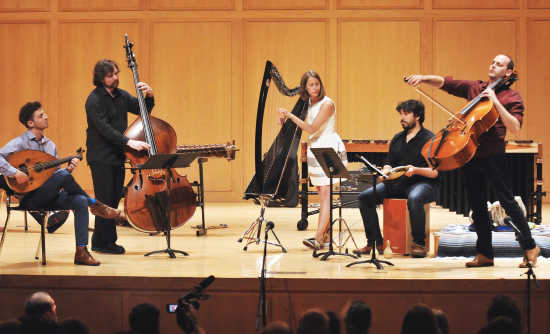 The 2017 workshop, which will bring nearly 100 participating artists and faculty musicians to Greencastle, will reconvene on the DePauw campus Tuesday, May 30, and continue for seven full days, including six straight nights of live music in two venues.

Although registration to participate as a musician has closed, several evening events are open to the public free of charge, including the GMW Faculty Concerts on Wednesday and Thursday nights.

The first of these performances, co-sponsored by the Greencastle Summer Music Festival, will take place in Gobin United Methodist Church (307 Simpson St.), and the second in Kresge Auditorium, located within DePauw’s Green Center for the Performing Arts (605 S. College Ave.), followed by four Participant-Artist Concerts (June 2–5), also in Kresge. All begin at 7:30 p.m.

During the intensive daytime workshops, GMW participants will play together in small faculty-led bands with each ensemble focusing on a different musical style representing a wide range of backgrounds and cultures, exploring and learning new repertoire, and improvising and creating arrangements in preparation for the public performances in the evening.

Many of the GMW participants are as accomplished in their own musical traditions as the faculty, whose main role is to introduce and guide the participants through the process of co-creation rather than teach “how” to play a specific piece.

“I don’t think there is anything like the Global Musician Workshop anywhere else in the world,” said DePauw faculty cellist Eric Edberg, artistic director of the Greencastle Summer Music Festival and a participant in last year’s workshop.

“Silkroad and DePauw are bringing together highly accomplished musicians from around the globe to learn from each other and create something new,” Edberg added. “The Silkroad process is a virtual model for how countries, religions, and even members of families can choose to work together. It truly opened new creative vistas for me.

“The six concerts create a festival unto themselves,” he continued. “Each one of them gives us in the audience an opportunity to witness miracles of cross-cultural collaboration: Six nights of amazing musical creations and six nights of witnessing an inspiring adventure in human relationships.

“This is going to be extraordinary.”

The 2017 GMW event schedule is also detailed on the School of Music Online Event Calendar at www.music.depauw.edu. For additional information about the workshop, visit the GMW website.