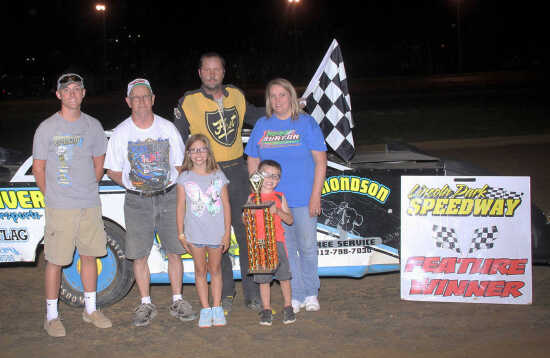 Cullen Goodman was a repeat winner as he captured the UMP Super Stock feature win a week after picking up his first of the season.
Carey Fox photo

PUTNAMVILLE — Warm temperatures and sunny skies greeted fans at Lincoln Park Speedway on Saturday evening. A stout field of drivers was also on hand Saturday night as 94 cars unloaded in pursuit of victory lane at the Putnamville oval.

Cullen Goodman repeated as the UMP Super Stock victor this week, repeating his win over Wes McClara from the week before. Brady Short stayed ahead of an early race melee that included several front running cars and went on to pick up the sprint car victory ahead of last week’s winner AJ Hopkins.

A.J. Smith won a side-by-side battle with Jordan Almanza over the first half of the bomber feature and then held off Cody Wright down the stretch to put Michael Connor’s No. 7 in victory lane. The 17-year-old Blair-built machine was plenty fast as Smith and Almanza put on a show with a high-low race that lasted past the halfway mark of the A-main.

Justin Bumgardner started on the pole and was a factor in the top-five for much of the race as Scott Crouch, Wright and C.J. Bryan were three-wide though the fifth lap.

A lap eight caution bunched the field back together, but on the re-start, both Smith and Alamanza went right back to their race for the top spot. Smith got to the lead and was able to extend a small advantage.

At the finish line, Smith picked up the win as Wright edged out Bryan for second with Almanza and Crouch in the top-five.

McClara and Goodman were heat race winners in the super stock class and would lead the field to the checkered flag. Goodman took the lead from outside the front row and was able to hold that spot after getting past McClara on the bottom groove. Goodman went on to repeat as the winner as McClara placed second ahead of Doug McCullough, Jonny Newgent and Scotty Massie in the top-five.

In the sprint car main event, Shawn Westerfield started on the pole as Max McGhee started alongside him. Dickie Gaines started inside of Short in row two.

Once the field went green, Short worked his way to the front and stayed out of trouble as McGhee and Hopkins got together and bunched up several front running cars. Short would get to the lead and stay there at the finish as Hopkins worked up to a runner-up finish after starting 14th overall. Shane Cockrum came home third ahead of J.J. Hughes and Koby Barksdale.

Twenty-four UMP Modifieds were on hand for competition Saturday evening as Bloomington’s Derek Groomer parlayed a third-place starting spot into a feature win ahead of pole sitter John Grenier and Kenny Carmichael Sr. Michael Fish and RJ Pruitt rounded out the top five.