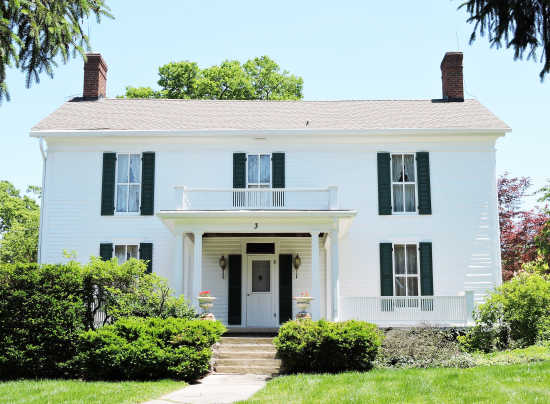 Elisha Braman-built home at 3 Bloomington St. -- owned by the Aker family since the 1960s -- will be open for a home tour fundraiser by the Heritage Preservation Society of Putnam County on Saturday, June 17 from 10 a.m. to 3 p.m.
Courtesy photo

Elisha Braman was the equivalent of a rock star in 1840s Greencastle. Architect of iconic buildings of the period for both county and college, his own residence will be open to the public for a tour hosted by the Heritage Preservation Society (HPS) of Putnam County on Saturday, June 17 from 10 a.m. to 3 p.m.

Entry is $10 for adults and free for children 12 years and younger.

The oldest house in the Eastern Enlargement Historic District, the Greek Revival structure stands at the southeast corner of Bloomington and Washington streets. Parking will be available at City Hall off Locust Street. 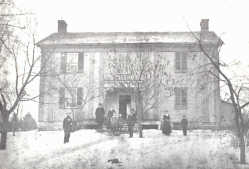 Elisha Braman and family stand outside their 1840s-era home at Bloomington and Washington streets in Greencastle.
Courtesy photo

The neighborhood was originally platted in 1836, and the land granted to Braman on Nov. 24, 1840, for the sum of $175. At that time it was the largest lot on Washington Street.

That original plot, however, was split up by later owners and on two separate occasions lost frontage to accommodate the widening of U.S. 231.

Mace Aker, father of the current owners, actually restored part of the initial parcel by acquiring back some of the adjoining property.

Hailing from Connecticut, Braman was tapped to design the first building for the newly founded Indiana Asbury College (now DePauw University). When the cornerstone for “The Edifice,” as it was reverently referred to, was placed in 1837 a crowd variously estimated at 10,000-20,000 watched. Spectators also listened as Rev. Henry B. Bascom -- president of Transylvania University, past chaplain of the U.S. Congress and characterized by contemporaries as perhaps the most popular orator in the country -- spoke for almost two hours. This was a pivotal moment in Greencastle’s history as the transition began from frontier outpost to college town.

Based on his success and reputation, it is not surprising that when the Putnam County Commissioners decided their current courthouse needed to be replaced in 1846, they charged Braman with preparing the plans. He was already responsible for a significant gem in the cityscape, and was about to add the most important structure in the county to his portfolio.

Meeting records detail that Braman was authorized to draft plans for a building 65 feet long by 50 feet wide and not to exceed the cost of $8,000.

Clearly the commissioners were looking to the future with such an order. In fact, this incarnation was in use until the turn of the last century, when plans were developed for the current courthouse.

Like the Edifice, the Braman courthouse had a row of chimneys lining both sides of the steep roof. The collegiate building, however, featured dormers and a bell tower to summon students to its classrooms. On the county structure, a pair of monumental columns at each end was flanked by pilasters and supported a classically proportioned pediment. They must have been a sight to behold as one rode the horse-drawn streetcar around the square.

It was with this classical spirit that Braman designed 3 Bloomington St., his home for more than four decades. The two-story clapboard-clad house retains a high degree of architectural integrity.

Although years have brought changes to the residence, including the addition of the front portico, these have not detracted from the overall integrity of the building. Faithful to the Greek Revival style, the doorway was originally recessed for a more three-dimensional look. Also at that time four sets of pilasters adorned the house, visually dividing the front into thirds, the same rhythm as the old county courthouse.

In addition to such architectural elements, there may be another connection to Braman’s courthouse. In the back landscaped area where visitors can enjoy blooming flowers and statuary, a pair of urns have been incorporated into the corners of a stone patio in front of an outbuilding. These urns rest on bases that at one time supported massive columns, perhaps the very ones that once stood at the old courthouse.

As an added bonus, the Aker family that currently owns the home has extensive collections, some of which will be on view for the day of the tour. Highlights will be paintings by Jacob Cox, George Jo Mess and Robert Kingsley. In addition, a 1904 grand piano still occupies a prime spot in the living room, where it was played when the younger Akers were wed in front of the fireplace.

Another treasure sure to delight is a century-old Italian chandelier in the dining room. Yet another treat is a signature and date etched into the antique glass of one window, apparently in celebration of a student’s graduation from DePauw in 1898. Additionally, inside one can still see wood trim most likely designed and installed by Braman himself.

The last room visitors will pass through is from an addition noted in the Recorder’s book to have cost the tidy sum of $400 in 1887 (raising the total value of the house at that time to $1,350). A large painting over that fireplace is the work of owner Steve Aker and not to be missed.

Aker recalled recently a hot day in the early 1960s shortly after his parents had bought the house when he was out mowing the lawn. An elderly gentleman approached in a long, black coat with a long, white beard. He was Elisha Braman’s grandson.

After visiting on the porch for some time, he reached into a pocket of his coat and pulled out a photograph. He pointed out his grandfather, Elisha Braman, standing in front of the house he had designed and lived in for many years.

The Akers plan to display this artifact prominently on the day of the tour.