CLOVERDALE — A 911 call from a concerned citizen led to the arrest of three Terre Haute men Wednesday afternoon in Cloverdale.

Around 1:30 p.m., Putnam County Dispatch received a call of a male lying in the back seat of a Cadillac parked at the Cloverdale Subway restaurant.

Cloverdale Town Marshal Steve Hibler told the Banner Graphic that he and Evidence Tech Rick Lambert had just left the nearby Cloverdale Travel Plaza, so they quickly responded to Subway. 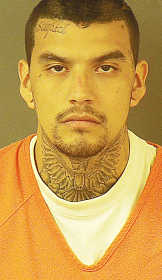 They found a man sitting in the rear passenger seat dressed only in shorts. He had no identification but told the officers he was Chad Crewes, 27, of Terre Haute.

Shortly thereafter, another man, identified as Ryan Damone Martin, 28, Terre Haute, returned to the vehicle. Martin told the officers they had a flat tire and were waiting on the arrival of a friend.

Officers discovered that both men had warrants issued for their arrest. Crewes had a warrant for probation violation out of Florida, for which Florida authorities would not extradite. Martin’s warrant was for marijuana charges in Vigo County. 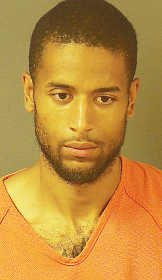 Hibler reported that both men are past felons, so officers were concerned to see a box of 9-mm bullets in the car.

Martin reportedly told officers they could search the vehicle and they would find no gun.

Putnam County sheriff’s deputies, including Maj. Dwight Simmons and his K9 partner Bo as well as deputies Virgil Lanning and Josh Boller, were called to the scene to assist.

During a search of the car by the K9, officers found marijuana, baggies with marijuana residue, a makeup pouch with currency inside, a set of scales and a handgun in a hidden compartment near the steering wheel.

Martin was arrested for Level 5 felony carrying a handgun as a felon, as well as possession of a firearm without a permit and an out-of-county warrant.

Crewes was taken into custody for Level 6 felony possession of marijuana (at least 30 grams) with a prior conviction.

While officers were on the scene, the friend arrived to help the two men. The third man, 29-year-old Gregory Jamison Myers of Terre Haute, was found to also have Vigo County warrants and was arrested as well.

Officers also discovered that the car Myers was driving had been reported stolen. However, the car is actually registered to Myers.

Hibler is hoping to obtain a search warrant for the second vehicle.

PCSD Det. Doug Nally is investigating the case, working with detectives out of Terre Haute.

An 18-year-old female was also at the scene with the three men, but she was released.

Hibler credited both the “great help from the sheriff’s department” and the citizen who reported suspicious activity with the success of the investigation. It’s a trend the marshal has been seeing recently in Cloverdale and he is happy with it.

“Again, it came from a citizen who saw something, said something,” Hibler said.