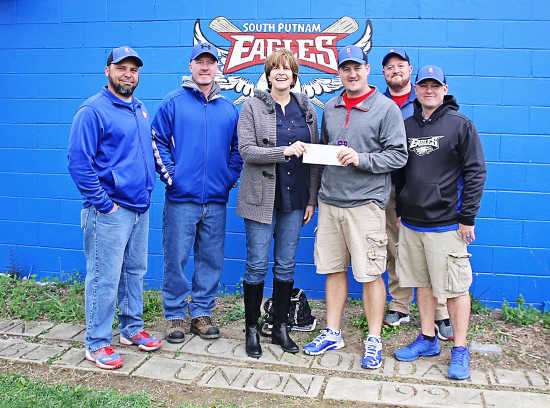 On a blustery opening day of the 2017 season of the South Putnam Youth League, Putnam County Community Foundation Executive Director Elaine Peck presented a check of more than $3,100 to the newly formed youth league.

“This check is from the Orville Webb Endowment established by Orville and Frances Webb through their will before they died in 2001 and 2002. This endowment will provide support every year for Belle Union Sports Park for as long as the park exists.”

Peck said Orville and Frances Webb loved children and wanted to help them have access to a safe place to have fun and learn values such as team work, good sportsmanship, hard work and self-discipline.

Peck reported that since inception, the Webb Endowment has awarded more than $230,000 for the benefit of various nonprofit and religious organizations.

The South Putnam Youth League is a newly formed nonprofit corporation that will unify and serve Reelsville, Belle Union and Fillmore youth leagues.

The league reports plans to apply to the IRS to become a designated 501(c)3 public charity, and to become a multi-sport league.

“The Community Foundation is pleased to see the communities of Belle Union, Reelsville and Fillmore coming together to serve our youth in a collaborative and efficient manner,” Peck added.

The Community Foundation is a nonprofit public charity established in 1985 to serve donors, award grants and provide leadership, enriching the quality of life and strengthening community in Putnam County forever.

To learn more about supporting Putnam County in the future through a provision in your will, contact Peck at 653-4978 or epeck@pcfoundation.org.