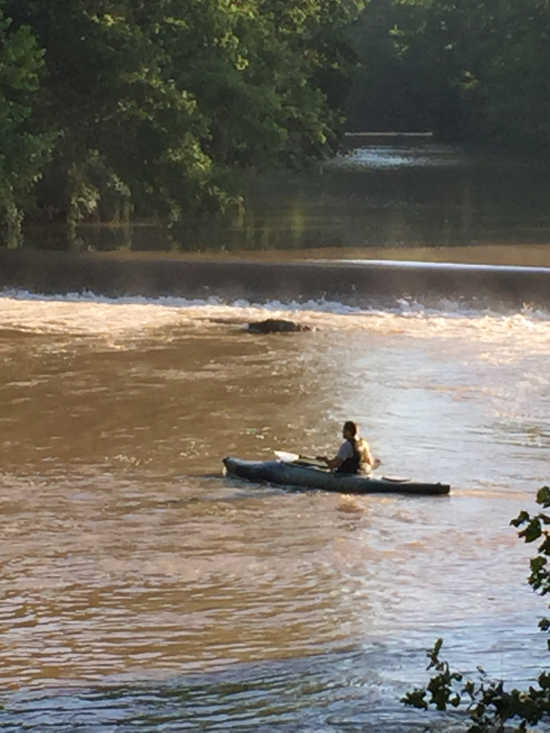 A conservation officer uses his kayak to maneuver on Big Walnut Creek during search for missing kayaker.
Courtesy photo

The body of a 29-year-old Indianapolis kayaker, missing since about 7:15 p.m. Saturday, was recovered Monday morning in Big Walnut Creek, about 600 yards downstream from the dam at the Greencastle Water Department.

The victim’s family was at the scene and positively identified him as Timothy Wells, a relatively inexperienced kayaker, according to Indiana Conservation Officers.

The body was recovered from a tangle of branches west of the U.S. 231 bridge over Big Walnut about 8:30 a.m., more than 36 hours after he was reported missing.

“The water had dropped enough that he was visible,” ICO Lt. Kent Hutchins told the Banner Graphic Monday morning.

On Saturday, Wells had joined a group of friends enjoying a seemingly perfect summer day on the creek, albeit it swollen with runoff from heavy rains earlier in the week.

Hutchins said the group, reportedly including several local individuals, started their excursion at Wildwood Bridge and some of them left the creek after reaching Crowe’s Bridge.

A group of six kayakers, including Wells, decided to continue their trip down to the low-head dam located near the Putnam County Fairgrounds.

The other five were maneuvering to exit the creek above the dam when they lost sight of Wells, Lt. Hutchins said, and the Indianapolis man was swept over the dam.

“There is no reason to believe he intentionally did that,” Hutchins said of Wells going over the dam. “Nothing indicated that he was a thrill seeker and was trying to go over the dam.”

The combination of the swollen creek and the kayaker’s inexperience may have proved too much, authorities believe.

“From what we heard, he just bought it (the kayak),” Putnam County Sheriff Scott Stockton said.

Wells’ kayak was described as a sit-on-top type rather than the version in which the operator’s lower body nestles down inside the boat.

“He was sitting on his life jacket,” Lt. Hutchins continued, “which we never recovered and probably cleared the boil line and was swept downstream before anybody (search team) arrived.

“We theorize that since he was in that sit-on-top mode, when he went over the dam, he was ejected beyond the boil line and went downstream immediately.”

Conservation Officers Patrick Labhart, Mike Gregg and Mike Vossmer were on the water when the body was recovered.

For three hours Saturday night and again Sunday, officers searched the banks of the Big Walnut Creek by foot as well as placing two officers in kayaks within the safe zone below the low-head dam. Water levels had dropped approximately two feet since the incident occurred Saturday evening.

Sadly, Lt. Hutchins said, conservation officers issue the same warning whenever such an incident occurs but that does not keep kayakers and canoers from venturing into troubled waters.

“We put the same message out there every time,” he said. “‘Stay away from these low-head dams.’ This was an absolutely preventable incident.”

The death investigation is still ongoing. An autopsy, to be performed by medical examiner, Dr. Roland Kohr, was scheduled for 3:30 p.m. Monday at Terre Haute Regional Hospital.