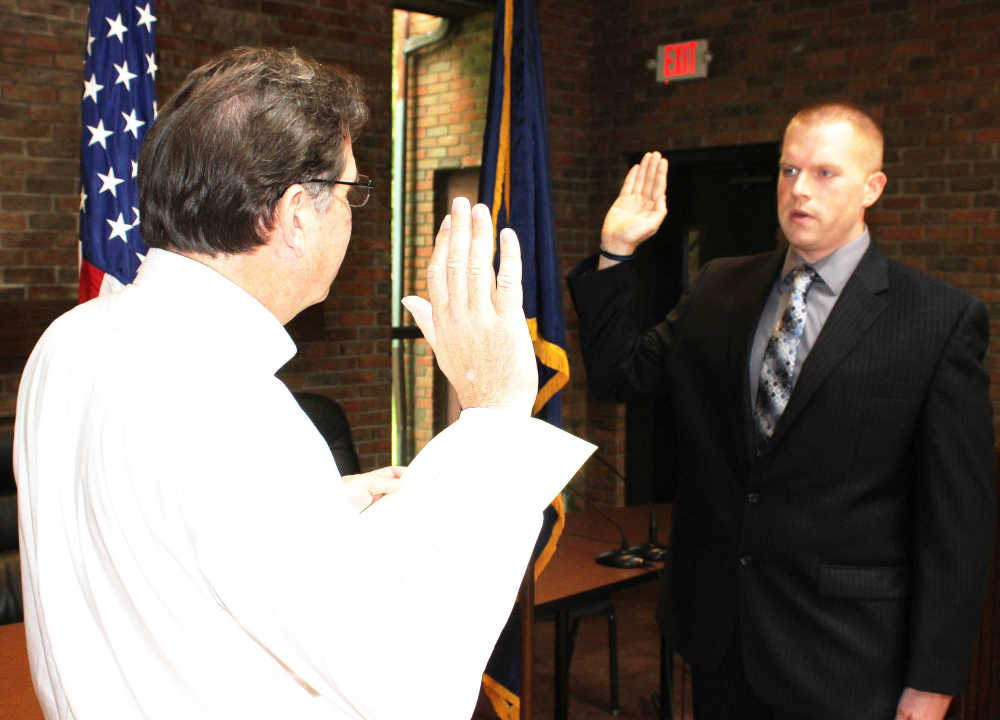 Banner Graphic/ERIC BERNSEE As the City of Greencastle’s newest and 17th police officer, Luke Brown (right) takes the oath of office Monday afternoon from Mayor Bill Dory at City Hall. A graduate of the Indiana Law Enforcement Academy, Brown brings more than two years of police experience with the Cloverdale department to his new position.

Suffice it to say, numerologists would have had a field day with the latest Greencastle City Police swearing-in ceremony.

For on the 17th day of the seventh month of a year ending in 17, Luke Brown became the city’s new 17th police officer, a position addition provided for in the 2017 city budget.

Taking the oath of office from Greencastle Mayor Bill Dory Monday afternoon at City Hall -- as his parents, Robin and David Brown of Lewis, and his fiancée, Amanda Long of Cloverdale, looked on -- Brown brings 2-1/2 years experience as a Cloverdale Police officer to the city department.

Greencastle Police Chief Tom Sutherlin called Brown’s hiring “a plus for Greencastle,” noting not only the new officer’s experience but his completion of training at the Indiana Law Enforcement Academy as positives the city doesn’t often see.

“We’re excited to have someone with experience and academy training,” Sutherlin said, adding that Brown will hit the ground running and not have to spend four months training at the academy like most newly hired officers.

“Everything about Luke has been positive so far,” the chief assured.

The 27-year-old Brown also spent three years as a military police officer with the Indiana National Guard and had a stint as a Putnam County 911 dispatcher prior to patrolling Cloverdale.

Growing up in Lewis, Brown was homeschooled and lived and worked in Vigo County until 2013.

Certified in EMT basic since 2008 and a certified AR15 armorer, Brown moved to Putnam County in 2014.

What helped lure him to Greencastle, Brown said, was the presence of the larger department and larger area to serve, coupled with an opportunity for career advancement.

The new city patrolman -- who began his duties Tuesday, riding with a field training officer -- should feel right at home with his new GPD colleagues.

“I trained with all of them,” Brown said, “and have been fairly close with them ever since.”