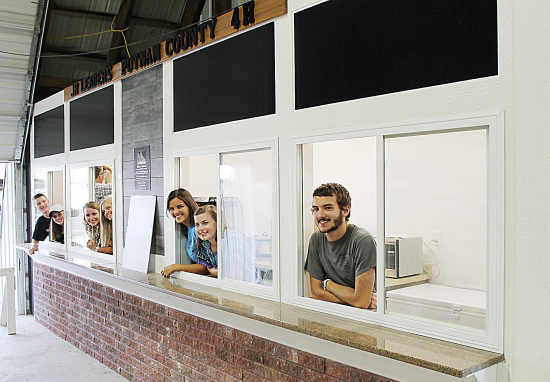 The very building in which an outpouring of generosity raised $20,000 in memory of a local 4-H’er who died tragically will now also bear the most lasting monument to that generosity.

It was at the Farm Bureau Indoor Arena during the 2014 4-H Livestock Auction that Riley Sutherlin’s hog sold for $15,000 and donations brought in another $5,000 in the Sutherlin’s memory.

Coming barely a month after Sutherlin’s death in a tractor accident, the funds were a way for the community to reach out to a grieving family. 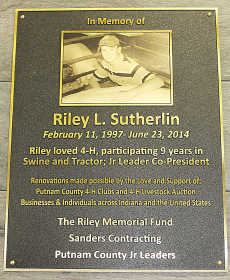 A plaque on the outside of the new Junior Leader stand at the Putnam County Fairgrounds Indoor Arena bears not only the likeness of the late Riley Sutherlin, but also the names of the groups responsible for the new stand, The Riley Memorial Fund, Sanders Contracting and Putnam County Junior Leaders.
Banner Graphic/JARED JERNAGAN

Riley’s parents, Ron and Alana Sutherlin, along with their children Kendra and Dillon, began looking for ways to give back to the 4-H and FFA community through the money raised.

On Thursday, in the very same room where the money was raised, they unveiled a completely upgraded and redesigned 4-H Junior Leader concession stand.

“One day we were sitting here and realized how nice the arena looked and how bad the concession stand looked,” Ron said. 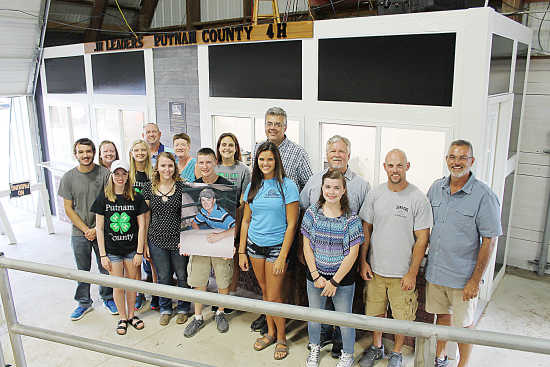 The Sutherlins began looking into their options and took their idea to 4-H Youth Educator Mark Evans, who presented it to the Junior Leaders club, which includes Dillon, the youngest Sutherlin child, as vice president.

The Junior Leaders were all excited by the possibility, including current co-treasurer Philisha Sanders and older sister Michayla Sanders, who completed her 4-H career last year.

The two young ladies told their father Phillip Sanders about the idea. Phillip wanted to get his business, Sanders Contracting, even more involved with the project.

“It really kind of exploded into what it is,” Ron Sutherlin said.

That “explosion” includes and enclosed, air-conditioned stand with sliding windows, a stone counter, brick veneer under the counter and even black, dry-erase panels above the windows.

Those dry erase panels, besides providing a place for menus or other messages, will even be a source of fundraising for the Junior Leaders. For $20 per event, the panels can be rented during the fair for special messages.

The air conditioning is also helping keep the concession stand staffed this year.

“Usually it’s hard to find workers, but it is full for every shift this year,” Alana said.

And while the Sutherlin’s credit Sanders for turning the project into exactly what it is, Phillip Sanders said he was simply glad to be a part of it.

“We want to thank the Sutherlin family for letting us be a part of this memorial to Riley, “ he said.