CLOVERDALE -- A second Interstate 70 semi accident within a little more than seven hours Thursday sent three persons to an Indianapolis hospital with injuries.

Shortly after 9 p.m. Thursday, Indiana State Police and Putnam County emergency agencies responded to the collision of a pickup and tractor-trailer in the westbound lanes of Interstate 70 near the 46-mile marker, five miles east of Cloverdale. 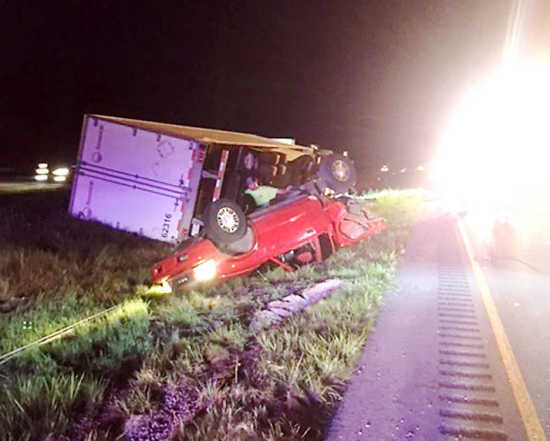 Both pickup and semi end up in the Interstate 70 median after an accident a few minutes after 9 p.m. Thursday near the 46-mile marker, five miles east of Cloverdale. State Police photo

Preliminary investigation revealed traffic was slowing and or stopped in the area, when a Chevrolet pickup, driven by George Best, 45, of Poland, suddenly changed from the driving lane into the passing lane. State Police said in doing so, the red pickup collided with the tractor-trailer already in the passing lane, causing both vehicles to roll over into the median.

Vehicles were reportedly slowing or stopped for back-up traffic from two earlier crashes at the 37-mile marker and 41-mile marker.

The tractor-trailer, which was hauling 27,000 pounds of air freight, was driven by Robert Lukacs, 49, of Ft. Collins, Colo. His wife (whose name and age were unavailable) was in the sleeper berth at time of crash. Both were transported to Methodist Hospital in Indianapolis after complaining of pain.

Best was also transported to Methodist Hospital for treatment of lacerations and a complaint of pain.

Troopers were at the traffic back-up with emergency lights activated attempting to warn motorists, particularly in the aftermath of a 1:45 p.m. semi rollover crash near the 37.5-mile marker, three miles west of Cloverdale.

That one-vehicle accident was blamed on a fatigued driver, Indiana State Police at Putnamville reported.

Semi driver William R. Jones, 59, of Jonesboro, Ind., was eastbound when he lost control of the Carter Express vehicle about 1:45 p.m. Thursday. The semi, which hauling dry goods, traveled north across the I-70 median, through the westbound lanes, and eventually rolled over after striking trees on the north side of the interstate.

Indications are the accident may have resulted from Jones falling asleep, State Police reported.

Jones was transported to Methodist Hospital with non-life-threatening chest and internal pain.