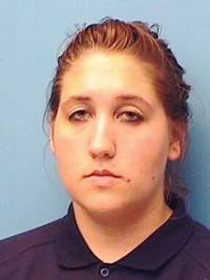 Phone communication and emails between Staphany Dawson of Greencastle, who was using a fake Jpay account, and offenders Michael Garcia-Barrera and/or Darius Johnson was recently discovered by the Office of Investigation and Intelligence and Fernell Keith McDonald, lead investigator at Putnamville Correctional Facility.

Intel gathered suggested that Dawson was trafficking a large amount of narcotics into the prison and that she was going to attempt to bring more in this weekend, PCF officials said.

Upon arrival at the Putnamville facility Friday morning, Dawson could not pass the metal detector and was brought up to the investigation office where she was Mirandized and interviewed, prison officials reported. She admitted to the trafficking and signed consents to a vehicle and bedroom search.

Dawson was transported to the Putnam County Jail and charged with dealing in methamphetamine (more than five grams) a Level 3 felony; dealing in synthetic marijuana, a Level 5 felony.

"An example of excellent teamwork," PCF Warden Brian Smith said. "Safety and security is our primary concern and preventing contraband from entering the facility is a huge part of that, but also holding those accountable for bringing it in is just as important."