Bretscher takes over reins at Division I VMI 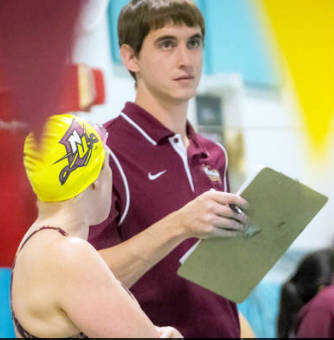 Bretscher comes to VMI following three seasons as the head coach of both the men’s and women’s programs at Division III Norwich University.

There, he led his teams to 18 new school records and, in his final season, he mentored the Norwich men’s program to a second-place finish at the New England Intercollegiate Swimming and Diving Association Championships. That was the highest finish for the team since 2000, while the women’s team’s 12th-place result was the highest since 2001.

“I am extremely excited and honored to be joining the athletics staff at VMI,” said the newest Keydet head coach. “The opportunity to work with the men and women at such a prestigious institution is a dream, and I am thrilled to take the helm of the swimming and diving programs as we make our inaugural appearance in the America East Conference.”

Bretcher noted VMI’s “proud” tradition of swimming and diving in the past as a reason for his excitement.

“I am eager to help write the next chapter in the history books,” he said. “I look forward to leading the Keydets to success not only as athletes, but also as students and cadets. I am grateful that Dr. Diles and the entire search committee provided me with this amazing opportunity.”

Prior to last season, Bretscher had built the women’s program from having zero members to over 15 in just one season and taken the Norwich men’s team to three straight titles in the Great Northeast Athletic Conference from 2014-2016.

The women’s team finished third in the league in 2016, its highest finish in over 15 years.

Bretscher came to Norwich following a three-year stint as a graduate assistant at Frostburg State, while also working on his master’s degree. He helped the FSU programs to what, at the time, were their highest totals since joining the Capital Athletic Conference, and earned the 2014 Jean Freeman Scholarship from the College Swimming Coaches Association at FSU.

“It’s a very exciting time for VMI swimming and diving,” said Dr. Diles. “Coach Bretscher has an incredible background. As a former U.S. Olympic Trials, World Championship Trials and NCAA All-American athlete during his time as a collegiate swimmer, Andrew brings exceptional technical knowledge and training expertise to this position. However, and equally important, Coach Bretscher has three years of head coaching experience leading both a men’s and a women’s team with a record of competitive advancement that resulted in unprecedented levels of success in the pool. His time at Norwich University, working with cadet athletes in a military setting, will be invaluable as he transitions to VMI.”

Bretscher graduated from The Ohio State University in June 2010 with a bachelor’s degree in Parks, Recreation and Tourism.

At one time, he held OSU school records in the 100 butterfly, 200 medley relay and 200 freestyle relay.

Prior to Ohio State, Bretscher was a member of the 2007 Auburn University National Champion squad as a freshman.

He is a 2006 Greencastle High School graduate and had an outstanding swimming career with the Tiger Cubs, winning the Herman F. Keller Mental Attitude Award at the IHSAA state meet in his senior year.