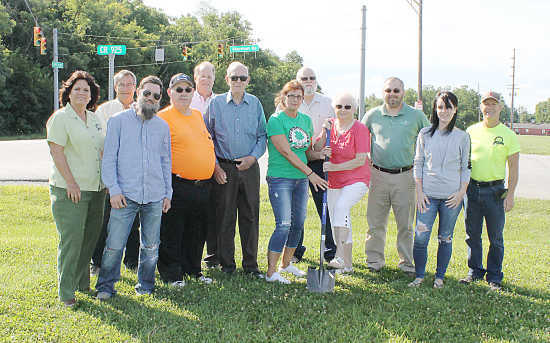 CLOVERDALE -- Representatives from United Excavating and General Contracting and members of the Cloverdale Town Council finally broke ground Friday on a project in the works since July 2016.

With a contractor selected and all financial aspects in order, the Stardust Road Project will now begin and is expected to be completed by the end of the year.

United Excavating and General Contracting, of Montgomery, was awarded the $1.2 million construction bid in June. Midwestern Engineers, responsible for the plans, had estimated construction would cost about $1.8 million.

The project is designed to improve access to the C Bar C Expo Center, Cloverdale Value Market, Stardust Hills Housing Development, Lou’s Diner and other businesses. It is also hoped that the improved road will encourage growth.

The plans are to widen the road to 24 feet with a shoulder, curb and gutter as well as installing turning lanes for Stardust Hills Housing Development and the C Bar C Expo Center.

In July Midwestern Engineers estimated total project cost at $2.5 million, and the cost has since stayed at that amount. To help pay for the project, the town applied for and received the Community Crossings Grant, a 50-50 matching grant, in the amount of $948,160.

To come up with its part of the match, in August the town council approved Ordinance 2016-12, which amended Ordinance 2006-12 to authorize the transfer of Motor Vehicle Highway (MVH) tax funds -- largest source of state aid for road construction and maintenance coming from gas tax and license fees -- to the town’s Rainy Day Fund, in a 4-0 vote with Gary Bennington abstaining.

Other funding for the project is expected to come from tax increment financing (TIF) -- taxes generated by and used in a “blighted” or “underdeveloped” area when its assessed values increase -- and a bond held by the Cloverdale Redevelopment Authority -- Cloverdale Town Council President Coweta Patton, council member Larry Fidler and James Coy -- to which the town has leased all the roads within Cloverdale until the town pays off the bond.

If there are any grant funds left over, the town plans to pave as many roads in Cloverdale as possible.

Construction was originally estimated to begin at the end of last year, and was then set for this spring, but the project is still on the original schedule for completion.

In a special meeting held just after the Redevelopment Authority meeting, the Cloverdale Town Council approved Ordinance 2017-7 and Resolution 2017-12. The ordinance approved appropriation of proceeds from the bonds, while the resolution accepted the assignment of the construction contracts.