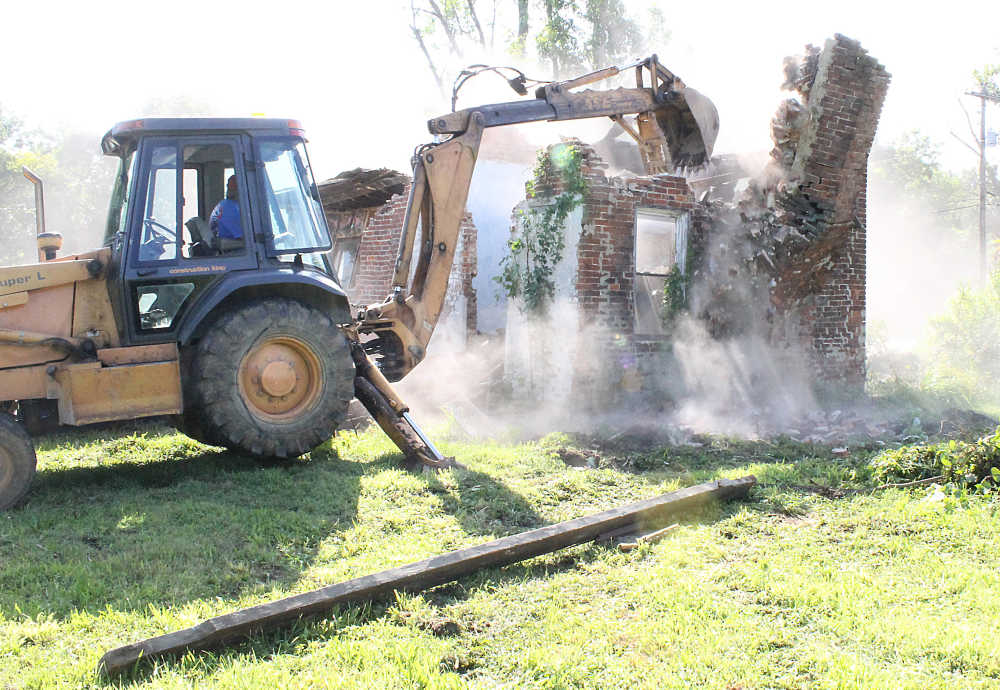 The chimney tumbles down on the historic summer kitchen in Putnamville recently. With the bricks now gathered, volunteers plan to rebuild the structure on the other side of U.S. 40.
Banner Graphic/JARED JERNAGAN
Order this photo

PUTNAMVILLE — When the walls came tumbling down recently on a historic Putnamville building, it wasn’t for good.

At least that’s not the intent of Lee and Susan Stewart, who have spearheaded previous preservations efforts in the old community along U.S. 40.

The focus this time is summer kitchen that stood behind the old Whitehall Inn, just to the northeast of the intersection of 40 and State Road 243. 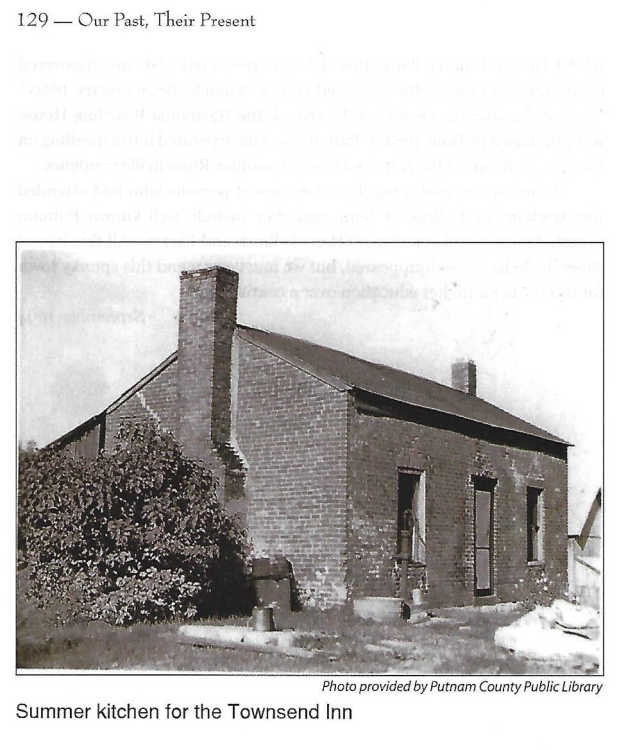 The two-story brick inn, built in 1828 by James Townsend, hosted a number of famous visitors over the years including, according to tradition, Abraham Lincoln before he was elected president.

Because of neglect, the inn was torn down more than 20 years ago, but the summer kitchen remained in place until it was taken down on Aug. 6, but Lee Stewart has different plans for the structure, which has a rich history of its own.

“It was probably originally used as a residence for eight freed slaves who chose to accompany Townsend from Kentucky,” Lee said. “These individuals took on the Townsend name and included Luke and Charity Townsend, later founders of the Greencastle African Episcopal Church at their home in Limedale.”

As for the building itself, Stewart estimates the 1828 building is one of the oldest structures found along the Old National Road in the area and one of the few structures in the state built for the purpose of housing freed slaves.

Stewart points out that the Underground Railroad was quite active in Putnam County during the mid-1800s. Putnamville was a town of abolitionists, including James Townsend and his family.

In the interest of this history and educating others about it, Stewart has taken on the rather laborious task of taking down and rebuilding the summer kitchen, and he’s hoping some civic-minded individuals and businesses will help him in his task.

“Why go to the great trouble of writing grants and bothering and revisiting individuals with the equipment and skills to help on the removing and reconstructing of a project such as this?,” Stewart asked. “It is because that is who we are and this project is what we believe is of importance to the community and ourselves.

“I’ve been an educator since 1967 — it’s a never-ending job,” Stewart he continued. “We are all educators. Some just teach the wrong subject. The history of Putnamville is very noteworthy with its strong influence by abolitionists, the Underground Railroad and the Presbyterian/Methodist Church.”

Besides this, during the last four years, with few exceptions, the historic buildings in Putnamville have either been torn down or allowed to deteriorate.

“All of that is way too important to ignore,” Stewart said. “It is an honor to Putnamville’s rich past that I can preserve one of the last remaining structures — with the important help of friends and members of the community.”

Where the friends and community members come in is in the task of rebuilding the 20-foot by 40-foot structure on the old Putnamville village green in front of the United Methodist Church.

Upon completion, the summer kitchen won’t be the only structure rebuilt on the village green, as the 1884 office of Dr. Horn was also moved to that location a number of years ago and now serves as the Putnamville Museum. The Stewarts also headed up that effort, enlisting the help of Hartman Sawmill, Cook Lumber Co. and even labor from Putnamville Correctional Facility.

The Putnamville prisoners have been at it again, helping Stewart gather bricks from the fallen building recently.

However, now the effort turns to the rebuilding phase, and even more support is needed.

While the structure was given at no cost — by a great-great-grandson of James Townsend, no less — labor and money are still needed to bring the project to fruition.

“In short, everything is needed other than the original bricks,” Stewart said. “It is one of the last of its kind in this part of America.”

For anyone interested in being a part of the “Friends of the Summer Kitchen,” all manner of unskilled and skilled labor is needed.