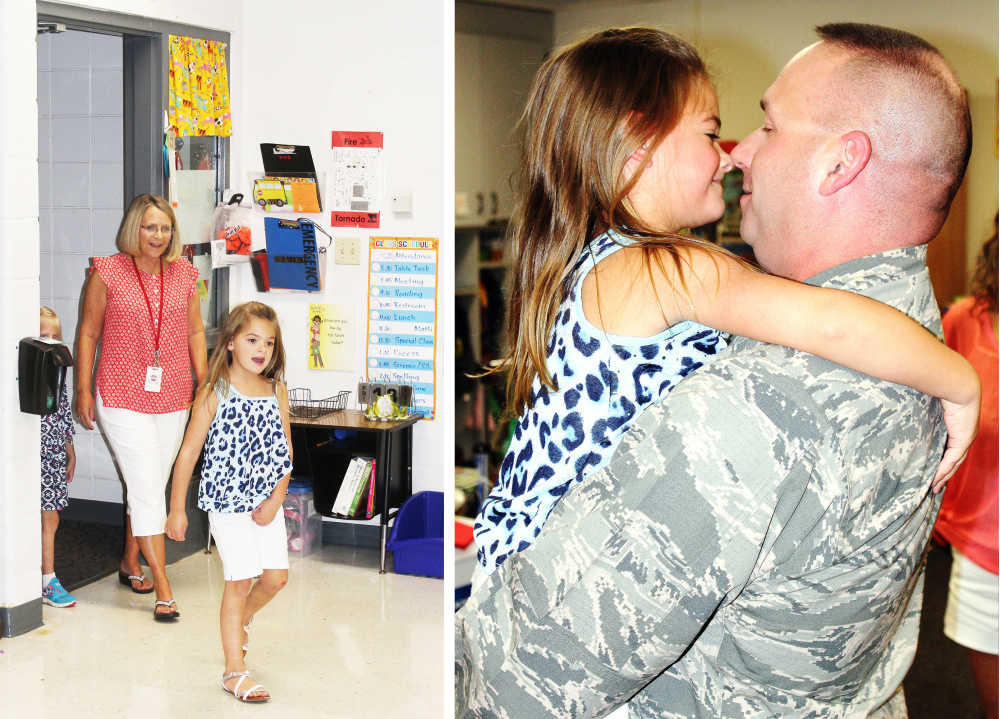 Kindergartner Emma Bailey enters the classroom in front of Central Elementary teacher Jan Swingley Friday to find her dad, USAF Major Beau Bailey, waiting in surprise to pick her up and hug and kiss her.
Banner Graphic/ERIC BERNSEE
Order this photo

Friday might have been too early for homecoming on the high school football schedule but that didn’t stop Major Beau Bailey from making a triumphant return to South Putnam.

And nobody had to sing “won’t you come home, Beau Bailey, won’t you come home” to get the 1996 South Putnam High School graduate to make his clandestine appearance at Central Elementary Friday afternoon. After all, he was there to surprise daughter Emma, a five-year-old in Jan Swingley’s kindergarten class.

Bailey, who had spent the past three months on duty with the U.S. Air Force in South Korea, concocted the plan to catch daughter Emma and her eight-year-old sister, Isabella, a Brazil third-grader, by surprise Friday. 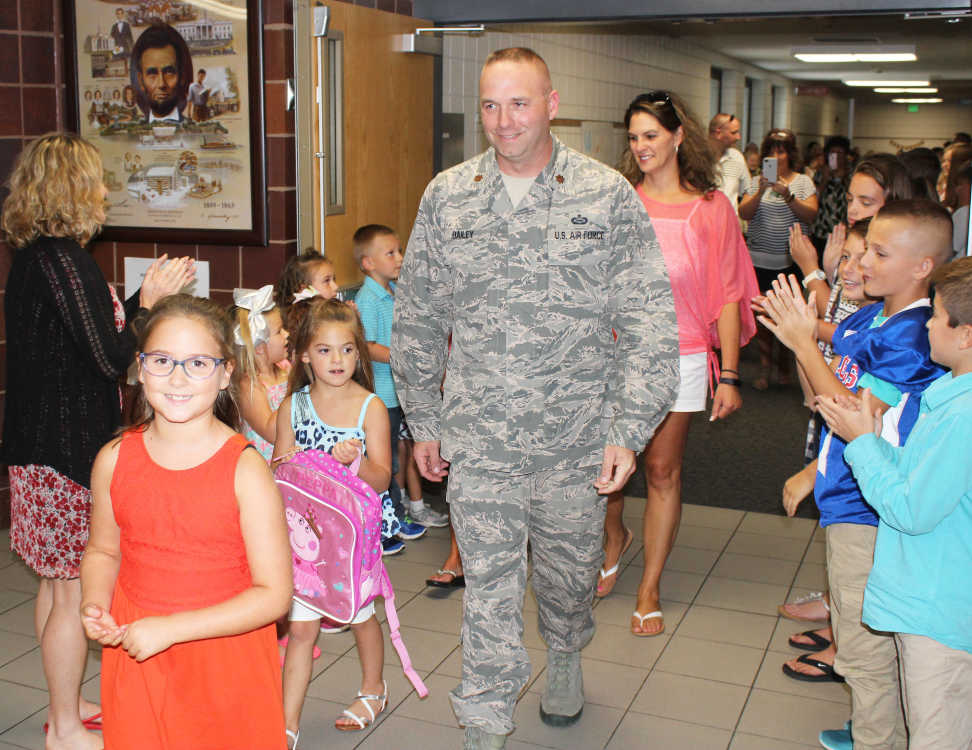 “They were all supposed to meet me at the airport,” he said of the girls, brother Brandon and his wife Susie, mother Jan Withrow, wife Becky and others, “but my orders got changed.

“I was supposed to be in on the 30th, but my orders got changed to the 17th. That’s why this is such a surprise.”

Major Bailey was in cahoots with Principal Todd Gowen and Swingley in pulling off the surprise. When the kindergarten class returned from the cafeteria, Swingley even arranged for Emma to lead them back into her room down the far hall.

Suddenly the little girl’s eyes widened, her pace quickened and she shrieked, “Daddy!” as she spotted Bailey across the classroom.

The youngster had not seen her father since May.

Major Bailey had endured a 13-hour flight from Seoul to Dallas and another leg from Dallas to Indianapolis Thursday night to rendezvous with his mother and brother and plot Friday’s surprise.

Leaving Osan Air Force Base behind now, Bailey expects to be home for about 10 months with a couple of short trips likely. Next July he will be sent to the Middle East for six months, a deployment that has his mother Jan Withrow (who has a Center Point address but lives in southwestern Putnam County) a bit on edge she admitted.

But Bailey is used to it all by now. The weekend after graduating from SPHS he joined the National Guard and has 21 years invested in it now, becoming a fulltime Guard member in 2008.

Bailey has also served in Turkey in 2003, prior to and during Operation Iraqi Freedom.

“Active duty timewise, I’ve got 14 years in,” he said, explaining that 11 of those are as an officer.

The call to duty has long been in the Bailey family, he noted.

“We have somebody (in the service) all the way back to the Revolutionary War in our family,” he said.

It was that service that motivated others at Central Elementary to take time to salute Major Bailey.

In the kindergarten classroom, the youngsters all marched around with small flags, singing “It’s a Grand Old Flag” in honor of Bailey.

“We really appreciate that Emma’s dad is serving our country,” Mrs. Swingley said before presenting the Air Force major with a large card signed by the class.

As he and his family departed the classroom, the rest of the school lined the hallways to clap and salute Bailey, with a few lucky kids even shaking his hand as he passed.

Did you expect all this?, he was asked.

“I did not,” he said. “I was just expecting to surprise Emma.”