By Johnathan Goode, FOR THE BANNER GRAPHIC 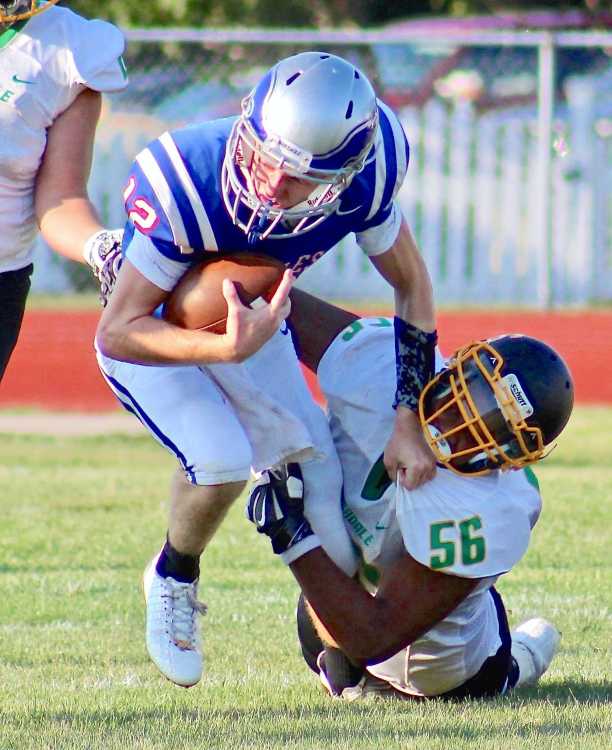 Special teams are a lost part of football to the average fan, but in South Putnam’s season opener against the Cloverdale at home Friday it very well could have been the difference between winning and losing.

In a game that turned on key special teams plays, the Eagles erased an early deficit to defeat the Clovers 20-6.

Cloverdale got the initial success behind special teams play when the opening kickoff died inside the 10-yard line and the Clovers stopped the Eagles on their own 12-yard line forcing them into a long punt.

The Eagle defense then put itself to the test, giving Cloverdale good field position but forced a three-and-out. A booming 53-yard punt by Trey Henry pinned the Eagles at their own six-yard line.

South Putnam was forced to punt on its own 11-yard line and Clover junior Jake Wilkes broke through to block Michael LeBlanc’s punt and the Clovers recovered the ball at the two-yard line.

Clover senior Tyce Jackson ran it in on the first play for the only Clover score of the night. The extra point was blocked and the Clovers lead 6-0.

“Our special teams played excellent tonight,” Clover coach Tom Winders said. “They really did. The problem is offensively on the line we got manhandled. We got physically tired. On defense we were out there too long.”

It was then time for the Eagles to make their mark. Cloverdale made a good defensive stop and forced the Eagles to punt, but a muffed catch by Nick Winders resulted in an Eagle recovery at the 18-yard line.

On the next play, Kain Gregory caught a pass from Christian Zeffel for the score. After the Jon Hodge extra point, the Eagles led 7-6.

“We had some young guys feeling in their tonight,” Eagle coach Nathan Aker said. “Michael LeBlanc played his first ever varsity game punting. We got rushed a little bit and held the ball too long which led to the block, but our kids responded well.”

It was all the Eagles needed and it was caused by great special teams play. They were not done though.

After a scoreless third quarter Zeffel scored early in the fourth on a five-yard sprint to make it 14-6 after the Hodge kick.

A few minutes later Aidan LeBlanc had a dagger with a 61-yard dash. Hodge’s extra point attempt was blocked.

“Aidan had that long run, but we had a lot of stalemates,” Aker said. “That’s testament to Cloverdale’s defense. They did a nice job. With us mixing kids in and out of the offensive line they just did it and took care of it. For Aidan to be able to break that off it was a great cap to his night. He’s a high-profile kid with a great attitude. For him to have that run it’s a great testament to him. He ran off the field saying it’s all about the O-line. They gave him a nice little hole and he took off. It sealed the deal.”

Both teams struggled to keep drives going on the night because of smaller offensive lines and quick and aggressive defenses. The Clovers did not have a first down until 3:43 left in the first half and all three first half first downs came on the same possession.

That drive stalled because of a penalty that called back a touchdown. The Clovers were forced to attempt a 32-yard field goal, but it was blocked and the half ended one play later.

“Overall, I was happy with that (defensive line),” Winders said. “We just got wore out. We will do some more conditioning on Monday.”

Penalties and turnovers hurt the Clovers in the second half as they had five penalties for 50 yards in the half alone and eight for 85 in the game.

Coach Aker believed that conditioning played a big part in this victory. His team fought until the end and it wore down a defense that had been pretty good all game.

“The conditioning side is huge,” Aker said. “That’s been going on here for the last 40 years. We got 40 guys out for football and I bet if we didn’t do the conditioning that we do we’d have 60. It’s tough. Our kids battle their butts off. It’s easy to talk about it in June, but tonight when it’s a close game our conditioning kicked in.”

“Normally we would be in and out,” Winders said. “They held us up where they kept pounding the ball and we didn’t have an answer for it.”

The Eagle defense also had a good game only allowing 63 rushing yards. It did struggle, though, against the pass, which gave up 127 yards.

The Clovers have taller receivers than the Eagle defensive backs and they jumped over the top and made catches.

“I believe in our wide receivers we have four guys that can definitely catch the ball,” Winders said. “We just have to give our quarterback enough time to hit the passes. If we do that we can get the ball to the six-three, six-four wide receivers.”

South Putnam will host Brown County next Friday and the Clovers will host Greencastle. Both games start at 7 p.m.