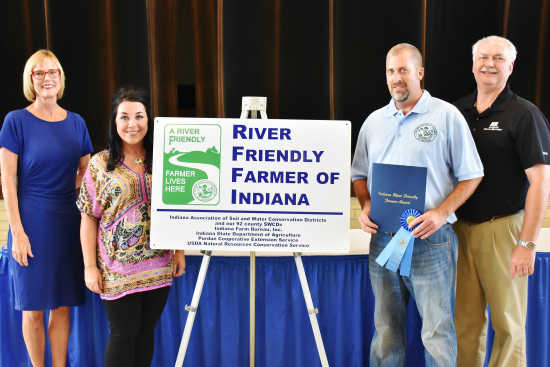 In a ceremony coinciding with Farmers' Day at the 2017 Indiana State Fair, 49 Indiana farmers from 44 counties throughout the state -- including Wilson Farms of Putnam County -- received the River-Friendly Farmer Award.

Andy Wilson accepted the award on behalf of Wilson Farms, a cattle and grain operation near Bainbridge.

The honored farmers join more than 900 farmers who have been recognized by the Indiana Association of Soil and Water Conservation Districts (IASWCD) since 1999 for their commitment to protect Indiana's natural resources, in particular Indiana's waterways.

Indiana Lt. Gov. Suzanne Crouch, along with Indiana Farm Bureau President Randy Kron presented the awards. Crouch spoke to the farmers and their families regarding their efforts, stating, "Your goals to improve soil quality and water quality and to restore and sustain human and wildlife habitat in Indiana's watersheds is truly outstanding."

Jane Hardisty, Indiana state conservationist, and the Indiana Association of Soil and Water Conservation Districts President Jamie Scott were also present and honored the farmers for their care of the soil, streams, rivers and lakes.

Wilson Farms is a cattle operation and grain producer located in the Eel and Big Walnut watersheds. It has wooded acreage and does select harvest and timber stand improvement.

With its cattle operation, Wilson Farms keeps the pastureland separate from the wooded acreage to maintain the quality of a healthy forest. It keeps the cattle out of the creeks and streams to reduce erosion and maintain water quality.

Wilson Farms uses a rotation of corn, soybeans and cover crops within a no-till system to decrease soil loss and increase organic matter. It is also installing drainage tile and waterways to improve water quality and decrease soil loss and has created buffer strips in areas that have allowed for wildlife habitat and pollinators.

The water quality that leaves Wilson Farms has greatly improved. The Wilsons state that being a fourth-generation farm, the goal has always been to leave the farm in better shape than when they received it and that is the reason to focus on conservation.

By using conservation practices they can be sure that the next generation will be able to provide for their family just as the generations in the past. They have worked with The Nature Conservancy and Quail Forever.

Andy Wilson was a 10-year 4-H member and was a FFA State Star Farmer and he continues to support both organizations.