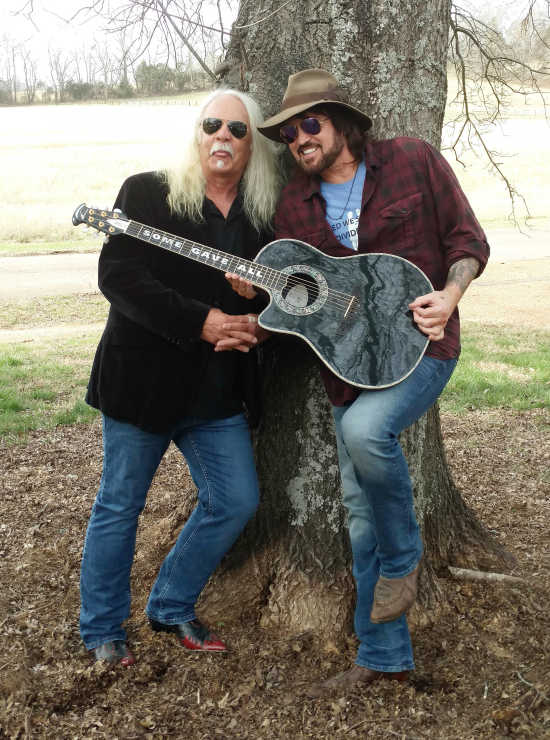 Greencastle native Don Von Tress (left), whose “Achy Breaky Heart” song made a household name out of Billy Ray Cyrus, will sing an updated version of the song Saturday night at the eighth annual Greencastle Music Festival on the courthouse square.
Courtesy photo

And he’ll be singing the infectious “Achy Breaky Heart” ditty he wrote that turned singer Billy Ray Cyrus into a household name 25 years ago.

“I hope we’re not making too much out of four minutes,” Von Tress told the Banner Graphic via phone from his Tennessee home, obviously forgetting about the hullabaloo over a two-minute eclipse earlier this week. 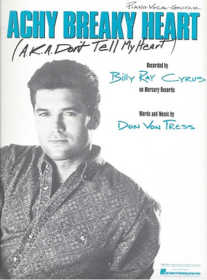 
Oh tell your Aunt Louise, tell anything you please
Myself already knows that I’m okay
Oh you can tell my eyes but watch out for my mind
It might be walking out on me today

While his appearance at the eighth annual Greencastle Music Festival Saturday night (approximately 8:30 p.m. or soon after the headlining Louisville Crashers take the stage) won’t blot out the sun, it’s sure to be a special moment on a night that continues to be one of the highlights of summer in the city. The festival is scheduled 3-11 p.m. on the north and east sides of the Putnam County Courthouse. Admission is $5 this year for the first time.

“We can’t wait to have Don Von Tress come perform and celebrate this song with us,” Gail Smith, owner of Almost Home and event creator shared. ”I think everyone can remember when ‘Achy Breaky Heart’ was all over the radio. It is such a fun song to sing along to.”

That was in 1992 when Von Tress was writing his hit song while hanging wallpaper at a Tennessee nursing home and Cyrus was pounding the pavement in Nashville, looking for his elusive big break.

“When Billy Ray first heard the song, it was my demo,” Von Tress said, noting his vocals on the song were “a little more laidback” and more rhythm and blues-infused than the rockabilly style of the mullet-haired Cyrus.

So about a year ago Von Tress and Cyrus went down to Muscle Shoals, Ala., a noted haven for music production frequented by greats like Bob Dylan, the Rollings Stones, Lynyrd Skynyrd and more. They restored “Achy Breaky Heart” to its R&B roots, adding horns and background vocals.

What emerged was “a more grown-up version of the same song,” Von Tress said, admitting he and Cyrus “weren’t really thinking about the silver anniversary” of the song.

The result, however, has landed the duo on the Grand Ol’ Opry stage and in radio studios all over Nashville.

“It’s the only song I know,” Von Tress laughed, excited that the Crashers, who feature horns in their act, will join him for the revised version of “Achy Breaky Heart.”

“We are so excited to jam with Don,” Maxwell offered. “He wrote a song that will last forever … how many people from Greencastle have done that?”

The song became a crossover hit on pop and country radio, peaking at No. 4 on the Billboard Hot 100 and topping the Hot Country Songs chart for five weeks, becoming the first country single to be certified Platinum since Kenny Rogers and Dolly Parton’s “Islands in the Stream” in 1983, according to Wikipedia.

The song is also famously considered by some as one of the worst tunes of all time, ranking No. 2 in VH1 and Blender’s list of the “50 Most Awesomely Bad Songs Ever.”

Von Tress still marvels at the social phenomenon it became.

Radio stations played the song so many times that part of the audience developed quite a dislike for the tune that first year.

“There was a little backlash after a while,” he conceded. “I heard stories about people threatening some radio stations that were playing it repeatedly.”

But the opposite was also true, he said. “There was a story about a Georgia garment factory where the women threatened to go on strike if they didn’t let them play the song.”

“You can’t argue with that,” Von Tress said, “that was supposed to be.”

Still he and his wife, just to be seated in the Grammy audience alongside notables like Little Richard, k.d. lang, Jon Secada and others, remains the thrill of a lifetime.

“We were sitting smack dab in the middle of all these stars,” Von Tress said, adding that “meeting presidents and actors and all” and touring with Cyrus “pretending to be somebodies ... that was a hoot.”

“I’m still incredibly fortunate and amazed every day,” he said. “That part’s stayed the same.

“And here I am 25 years later, still going to make some music.”

Von Tress said he looks forward Saturday to also seeing his “oldest and best friend” Rod Kersey, who had his own recent return to the stage with the Average House Band’s local appearance. Von Tress has a couple of cousins in the area and his parents are buried at Boone-Hutcheson Cemetery.

“I was born at the old hospital,” he said, noting how the building is now apartments.

“I went to Jones School when it was brand new, but it’s gone now,” he said, only to be corrected that Jones is still there and will be converted into apartments.

“Then I went to Miller School for a while, and I’m sure it’s long gone,” he said, only to be told Miller is now apartments for those 55 and older.

Von Tress then said he went on to the junior high when it was in the old high school building, “and I suppose that’s apartments, too.”

Nope, condos, he was told.

“Seems like everything I touch turns into apartments,” Von Tress sighed.