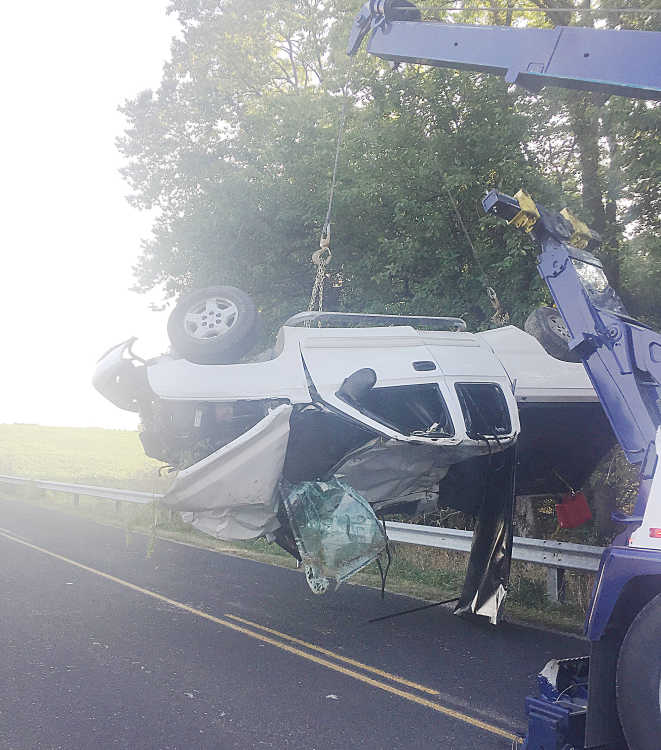 A Greencastle man was airlifted to an Indianapolis hospital Friday morning after flipping his truck in a pre-dawn accident on Shortcut Road in Monroe Township.
Courtesy Putnam County Sheriff’s Dept.

BAINBRIDGE -- After flipping his truck before dawn, a Greencastle man remained entrapped in for about an hour before he was discovered Friday morning.

Fred Van Arsdale, 60, was later airlifted to an Indianapolis hospital for pelvic injuries.

Lt. Donnie Pettit of the Putnam County Sheriff's Department said that some of the details about the accident are unclear, but that Van Arsdale had been bound for work on Shortcut Road (County Road 25 West) at around 6 a.m. when he lost consciousness.

Van Arsdale told Pettit he had surgery on Thursday and that he "blacked out."

"The next thing he knew, he just woke up and was laying upside down in the truck," Pettit said.

After Van Arsdale lost consciousness, the truck drifted off the west side of the road and ramped a guardrail. It then struck a concrete structure that caused it to flip over.

The rear of the truck came to rest in a creek bed.

The wreck remained undiscovered until after 7 a.m., as police were dispatched to the scene at 7:21 a.m.

Van Arsdale was partially ejected from the truck, but had to be extricated by responders from the Bainbridge Volunteer Fire Department.

An ambulance from Operation Life was on the scene, but due to the severity of Van Arsdale's injuries, he was transported directly to St. Vincent Hospital in Indianapolis by a Stat Flight helicopter.

Van Arsdale's 2007 Chevrolet Silverado was totaled in the accident. The vehicle was retrieved and towed by Curtis Wrecker Service.