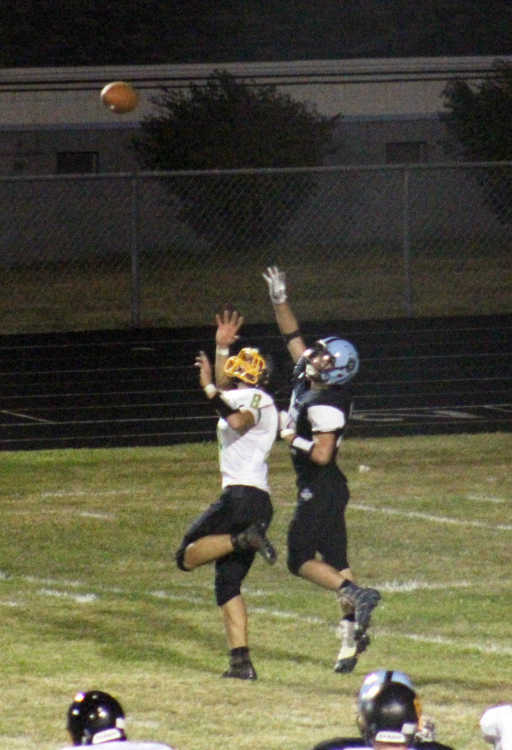 The Cadets didn’t miss a beat, however, as sophomore Jason Mantooth stepped up and ran for 172 yards and two touchdowns in leading his team to a 27-0 win over the Clovers.

Cascade won for the second straight week to even its record at 2-2, as Clovers fell to 1-3.

Cascade scored a touchdown in each quarter, and got all the points it would really need on its first possession. After forcing Cloverdale to punt on its opening drive, the Cadets got a 26-yard punt return from speedy sophomore Alex Sanders and took over at the Clover 44.

Noah Mourey added the extra point for a 7-0 lead.

The Clovers were held without a first down again on their only other possession of the first period, as well as their first drive of the second quarter.

Cascade was stopped on downs early in the second quarter in Clover territory, but added an 18-yard Mantooth TD with 4:59 left in the first half for a 14-0 lead.

The Clovers then took off on their best drive of the night, starting on their own 28 following the kickoff.

They picked up their initial first down of the night with 4:08 left before halftime on a 9-yard run by Tyler Kaeff, and eventually drove to the Cadet 29 before missing a field goal on fourth down.

Cloverdale recovered a fumble deep in Cascade territory just before halftime, but coughed up the ball on the first play from scrimmage as part of a double reverse play.

The Cadets opened the second half by starting at their own 30, and drove down the field with Mantooth scoring from 32 yards out for a 21-0 lead.

Kottkamp hit Sanders for another TD, this time from 15 yards out, on the first play of the fourth period.

The Clovers took over at their own 25 and marched to the Cascade 31, before incompletions on third and fourth down ended the drive.

The remainder of the game was marred by penalties, many of the “dead ball personal foul” variety. The teams combined for 20 penalties costing them more than 200 yards between them.

Cloverdale coach Tom Winders was not happy with how his team played.

“They ran the counters on us, and they tried to spread out our linebackers,’ he said. “They ran the ball, and defensively we didn’t have an answer for them.”

Clover quarterbacks Drew Boyette and Parker Watts completed 9 of 26 passes between them, but were victims of some catchable passes that fell to the ground.

“Some of that was timing,” he said. “And we weren’t as focused on catching the ball as we should have been. We were more focused on the hit than the actual catch.”

Winders was also not happy with his team’s penalties, especially in the second half.

“I’m not going to blame nothing on the referees,” he said. “But the hankies were a little loose there. I’ve never seen that many penalties come out on basic stuff. We lost the game because we didn’t play well.”