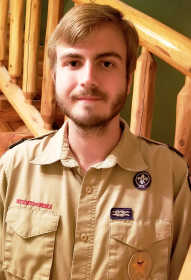 CLOVERDALE -- A Cloverdale Boy Scout who says blindness has made an impact on his life will use his Eagle Scout project to host a dinner fundraiser to aid the visually impaired.

The unusual blind dinner evening is the brainchild of Eddie Mannan, a Troop 93 Boy Scout and the son of Doug and Becky Mannan. The night of fun and education in which participants eat while blindfolded is scheduled for 6 p.m. Saturday, Oct. 7 in the Cloverdale Middle School cafeteria.

Tickets, which must be purchased in advance, are $20 each. All proceeds from the event will benefit the Indiana School for the Blind and Visually Impaired (ISBVI).

Currently a Life Scout who is working toward obtaining his Eagle Scout rank, Mannan said he’s required to do “a small project that in some way is found beneficial to the community.”

“Though not being blind myself,” Mannan continued, “blindness has had a rather large impact on my life. So, as my Eagle Scout project, I intend on having a Blind Dinner to raise awareness for the needs of blind people in our community.”

His mother Becky explained that blindness is a hereditary (from birth) condition in their family.

“His uncle (age 24) is blind and graduated from the Indiana School for the Blind and Visually Impaired in 2011,” added Becky, who is a member of Lions Club, which is dedicated to sight, and a Lion trustee of ISBVI.

The Mannans often go to the school to participate in activities and complete service projects.

A Blind Dinner is basically a fundraising event where people pay to have a nice meal together. The only catch is that participants must eat the whole thing blindfolded, just as if they were blind themselves.

“The goal is that during the dinner, people will gain a newfound appreciation for how tough it is for a blind person to even do a simple task such as eating,” Mannan said.

“For somebody with sight, such as you and me, eating is second nature,” he continued. “We don’t think about it, we just sit down and eat, however, there is a new level of difficulty added when one of your primary senses is taken away.”

Not only is the dinner designed to raise awareness for the blind, but all the money raised will be put toward buying a “Smart Board” for the Indiana School for the Blind and Visually Impaired.

“A Smart Board is kind of like a giant iPad, it hangs up on the wall like a chalkboard and the kids can touch it, write on it, some can see it better, and it can speak to them,” Mannan said, quoting ISBVI Supt. from Jim Durst as praising the equipment.

“This piece of equipment has truly made a difference for our low-vision students,” Durst has said. “It allows them to participate more fully in their education.”